A Couple of Lads Insane

So, on Sunday, Craig and Mark sought some better/improving conditions and headed for the Hurt Lochan with some hope.

Hmm, it seemed as if there was an inversion of sorts as it was never cold in the Coe carpark and even warned up with height.  Soft snow most of the path up until at lochan height when the top layer crusted...just - not encouraging.

There has been a recent dump of snow and the corrie has a 7-9'' layer of new snow on top of an icy layer, so avalanche hazard was always in our minds, though it seemed secure enough on approach under foot... 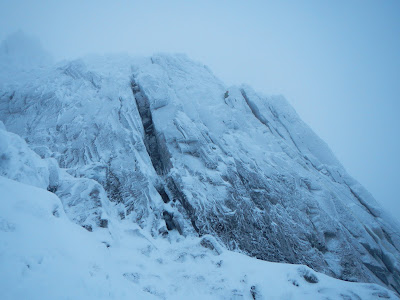 Anyway, in the mist, we ended up under Twisting Gully and sought out Twisting Grooves - a good IV,5 route up the buttress on the lower LHS of Twisting Gully.  The guidebook gave a reasonable topo and we headed up what seemed like the correct starting groove.  Mark lead the first pitch with a couple of bold moves for the grade (one in particular was pushing the grade with aplomb).  Craig led the second; a sustained corner, kicking out his two pieces of pro before thrutching over the top onto a ledge and thence to the top of the third pitch of Twisting Gully. 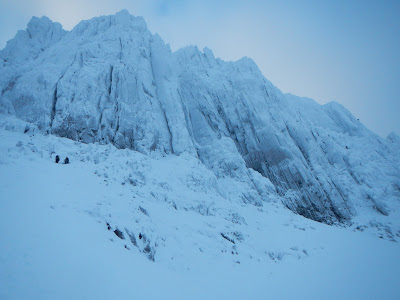 There was a team on Twisting Gully trying to get over the chockstone.  It looked very thin and usually has enough of a snowed up bank to give access for a high axe placement but the team made a fine effort at it without success.  Mark had a good attempt too and nearly got high enough for a placement but getting ones feet high enough was the problem with no real purchase.  It seemed everybody and their granny were struggling to get over without success.  We decided to bail as the Q was building and the crux of the climb was over (a super strong lad arrived and got over with difficulty - just to end the story!) 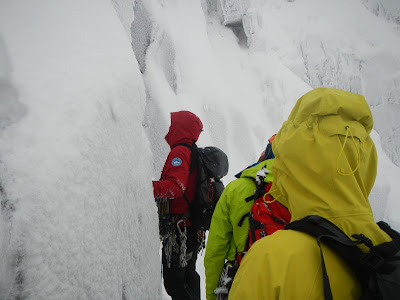 A long abseil down saw us well past the gully entrance - in time to see a team abseiling off Tilt, an impressive line!  Conditions wise, there is no neve to speak of, although everything looks white, and both pitches were principally mixed hooking, though the turf was nearly frozen on top - enough to help a bit.  It needs a bit of a cycle to consolidate but hopefully this week's weather will help. 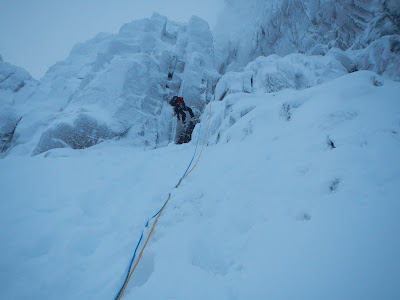 On looking back to the route, we think we started too far left of the proper line, which looked more amenable and had the p1 chockstone we never found...heyho, another day.

All in a grand day out, if a late finish due to too much Q'ing.

Thankfully neither of us 'fell to earth'.
Posted by Craig Coid at 12:59