Meat in the Sandwich

Craig and Mark followed the sunshine on Saturday, seeking a new route but one which has been much admired from a distance.  It's been a few years since Corrie an Lochan was visited, maybe 7, 8, 9 even 10 years since Craig and Bill climbed RH Y Gully??, and it's a very pleasant walk in if a little rough in places over the boulders.

Craig takes up the story...

Savage Slit was on our minds and I recall seeing it that winter thinking it looked such an awesome line...not necessarily in winter at that time for me!!  Things have changed a little since then, tho the walk in pretty much was as I recalled...lovely 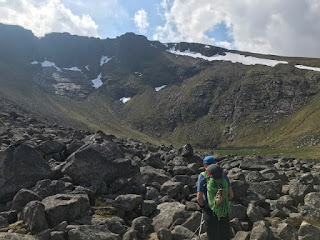 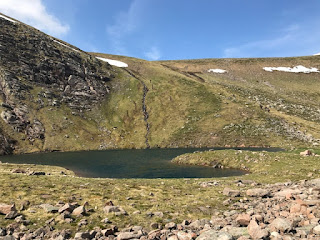 The approaching cliffs look very enticing and SS is well over the right, so we headed past the beautiful lochans, with the great slab coming into view in all its avalanche threatening horror; smooth and perfectly angled - it even released a bit of snow as we made our way to the cliff!

Past the lochan, it's a nice steep pull up a gravely path to the base, where we came upon a pair on P1 who had been completely invisible to us on the walking...a surprise but we had a nice chat and a leisurely prep as they cleared the first stance.

It's intimidatingly steep from below and understandably demands respect; Mark took P1 whilst I watched & belayed attentively.  The book suggests a 10m first pitch followed by a 20m second; this seemed counter-intuitive (even in winter I don't see the benefit but what do I know) so he linked 1 &  2 together, as the first pair had, and struck off up the inviting rock and 'slit'.

P1 is a lovely opening pitch with nice bridging and generally stays out the Slit.  The rock is super grippy granite with plenty amenable hand holds and an abundance of foot placements.  The attention it receives in winter is obvious with the wear on the rock from crampons and picks on numerous key placement edges in much evidence.

The only thing about the stance on P1 is the low head height which hardly helps Mark or I as we kept banging our heads on the overhead rock!!  A slick change over and I was off up P2 with a meaty start onto a small platform after about 10 feet, providing a nice photo opportunity;

P2 is a lovely pitch, which kept me in the Slit for much of the time and a lovely place it is too.  The hand holds are there when you want them and the narrow constriction in the slit offers nice if narrow bridging and chimneying, and even a little lay backing. The pitch terminates on a nice spacious ledge serving at least three climbs and obviously well set up as an abseil station.

The book suggests the final pitch is of limited enjoyment and so it proved with an easy scramble interjected with a pull over an overhang.  We got to the top and abb'ed straight back down to the abseil stance proper and used the plethora of heavy duty in situ tat and krab to get back down where we met Allan and Morag who were up for a split shift climb from the Lodge.  As we chatted and checked out, they headed off for a fun day.  The walk out was fast and sunny...

...and we got back to the car in a sweat!  It's a long drive and an average walk in to the Gorms from Glasgow but today was worth it.  What lovely climb!  Reasonable on the grade and a stunning location with a quick abseil back to the bags...what's not to like.

We scoped the climb and thought of winter; it's a V6 and a serious proposition for us...but maybe worth the effort to try.

Cairngorms; Into the Wilds

Craig and Bill went into the southern 'Gorms from the Punchbowl seeking a wee adventure on the bikes scoping a dofe route for East Dunbartonshire Council.  A sweet looking route was identified and we set off in the sun seeking single track sweetness.

Craig and Bill have explored a bit of the S' Gorms but this took them to River Avon and the stepping stones, thence to an eastward route down the River Avon.  Sadly, after the Hutchison Memorial Hut turn off, the path becomes very bumpy and unrideable all the way to the Refuge at the River Avon...bummer.

After a long push down the River Avon, we got on our bikes again for the last leg to Faindouran bothy...what we later learned was three hours short of our intended bivy site!!  However, tired and getting cold, we decided the bothy was too good to miss and we settled down for the night, with some food and music.  This is a wonderful bothy, well done MBA; clean, well stocked with wood and warm despite it being at least -3c overnight.

After an early rise, we were off about 630am and found the Wee Pony Man's Hut...not sure if it was the pony or the men who were small but its a great wee find and would make a good howff overnight if required.  The path is well rideable from here for a long distance and we made good time.

The big house at Inchrory is mighty impressive and we then headed south for Lochbuilg with some lovely single track enroute.

A bit of walking to get through Creag an Dail Mhor and Beag saw us approaching civilisation again...we saw people far in the distance but saw after a coulee of beautiful spots;

Not long after this we got back to the van and somewhat refreshed our selves at the rather special Bramear Bothy Cafe on cake, coffee, coke and scone...burnt a few calories; put them straight back on.