Craig, Mark and Bill chased the weather to Aviemore on Saturday seeking some action on the hill.
A chilly drive with snow on the way up saw us head off into the Sneachda in some seriously blowy spindrift...GREAT FUN at last.

With monster cornices a plenty, wind blowing fresh snow from the SW, we looked for a safe option and saw pleasing scoured avalanche trails out of Alladin's Couloir, so we headed for the buttress with the guide book out.


Mark took the first pitch; a meaty steep groove over some hard steps on finely placed points with just enough gear when necessary.  As it turned out, he linked P1 & 2 together to take us to the snowy ramp after 40m.

A quick swap of the ropes between Craig and Mark, and Craig was off up pitch 3.  Increasingly steep ground took him to an option of straight up a tenuous crack with a peg just out of reach or a move left onto a platform to think about things.  Once on the platform, the route became obvious with the spectacularly exposed traverse on his left.  A quick nut in place saw him through; the ledge can't be more than a few inches in places but the hooks give plenty confidence.


An open chimney leads up to the crux open book corner and a little run out; some cool moves and plenty scratching on the right foot saw him over the top and onto the block belay/abseil station.

We abseiled into Alladin's Couloir and down to the bags for some food before a very pleasant walk out.

After a very disappointing winter, we knocked off a very good route which felt a bit harder than the grade on the day; anyone expecting a bog-standard IV 5 would be in for quite a surprise we thought.

Craig forgot his camera and Bill left his in his sack so we only have a couple of abseil and ugly mug shots from the day, pity.


Most mates just hang with a beer and some random chat. Not us - mid week 'Y' hang rescue in the dark...just to make it EVEN MORE exciting! 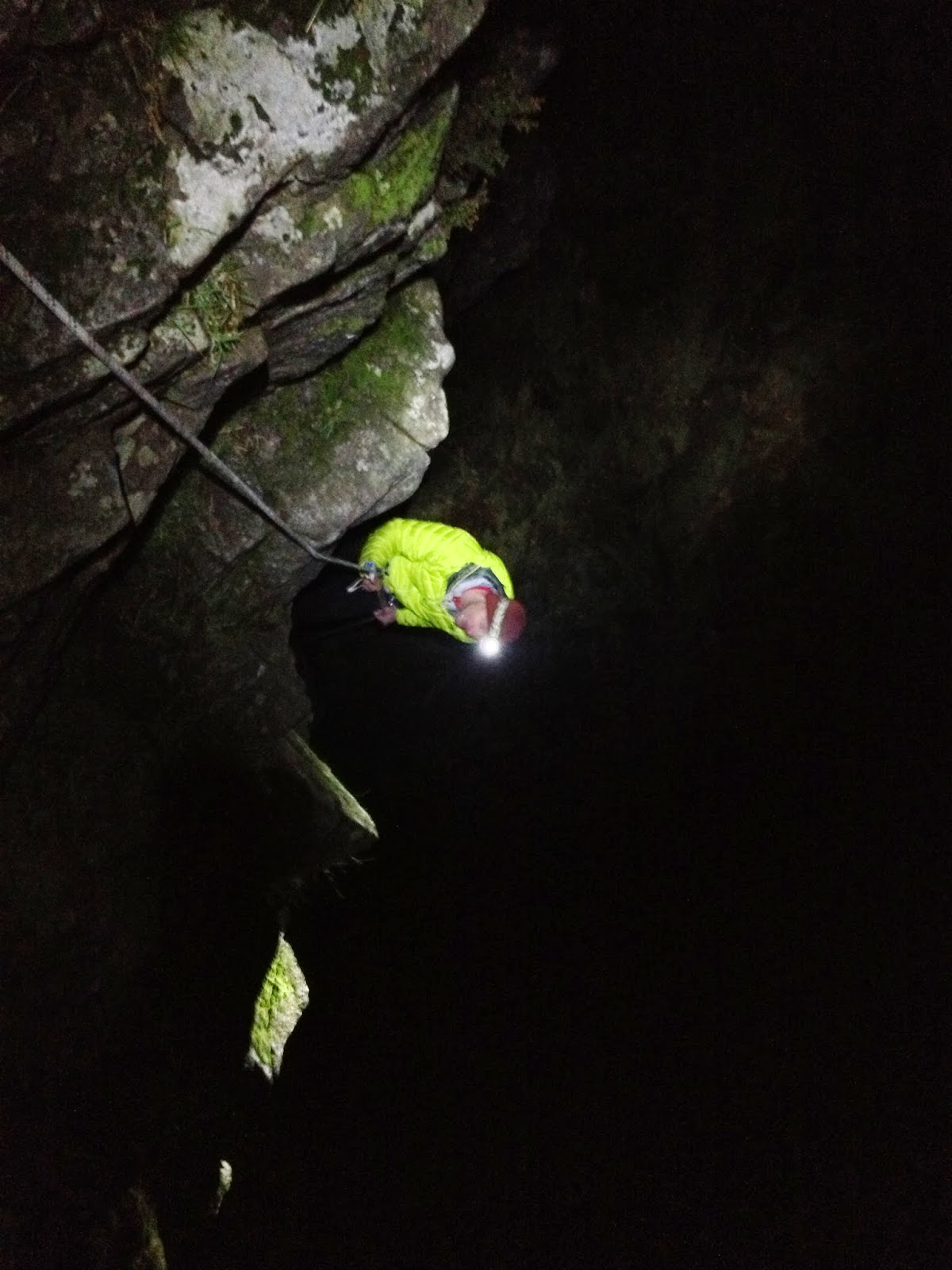 Posted by Vertical Obsession at 15:49 No comments:

A quick trip north to Glen Coe on Monday saw Craig head up the Zig Zags on Gear Aonach for a quick hit in the snow to the 'Hurt Lochan'.

The sun was out but the snow stripped from the route until he got onto the ridge proper.  It was a little wet until topping out onto the ridge to be greeted with the sun..who'd have thunk it?

Speaking to a couple on their way to Bidean via the Lost Valley -  he told them, "that's a bad idea" - and another on their way to Twisting Gully as the evidence of avalanches and cornice collapse (and rising temperatures) was everywhere to see.

Some lunch in the loch, photos galore then a walk back down to come home all too early for Craig.

A supper solo day in the sun and sugary snow; not nice for climbing tho.

Craig and Mark headed for an overnighter in the Coire Cas carpark for an early start to the Norries.

A vino night cap and up at 6am saw us watching the crowds head into the 'Sneachda...so, we headed for Lurcher's Crag at a more leisurely pace.

Enroute, we saw a full depth avalanche trail across the Lairig Ghru...very scary.

We had K9 in mind but after getting to the base, it was clear the ice was very fragile, wet and delaminating.  The traverse to the base of the first pitch looked unappetising so we back off and headed for what turned out to be North Gully (III).


Soloing the route up to the main ice pitch midway, we passed a rope of 2 and chatted about this winters rather "tricky" conditions.

We roped up for the "steeper than it looked" ice overlap then continued solo to the summit.

Onwards to the crag summit and a pleasant lunch and chat with the keen ski-mo'ers saw us head off towards to the ridge down to the east side of the Chalamain Gap; it was incredibly icey on the way down due to wind scouring and cold temps...fun nonetheless.


A pleasant walk out saw us head for Aviemore, a quick gear shop scan and coffee at the inimitable Aviemore Mountain Cafe; thence home and a hearty dinner.

Fine day out; first proper sunny winter's day in a while.  The snow is beyond description mind! 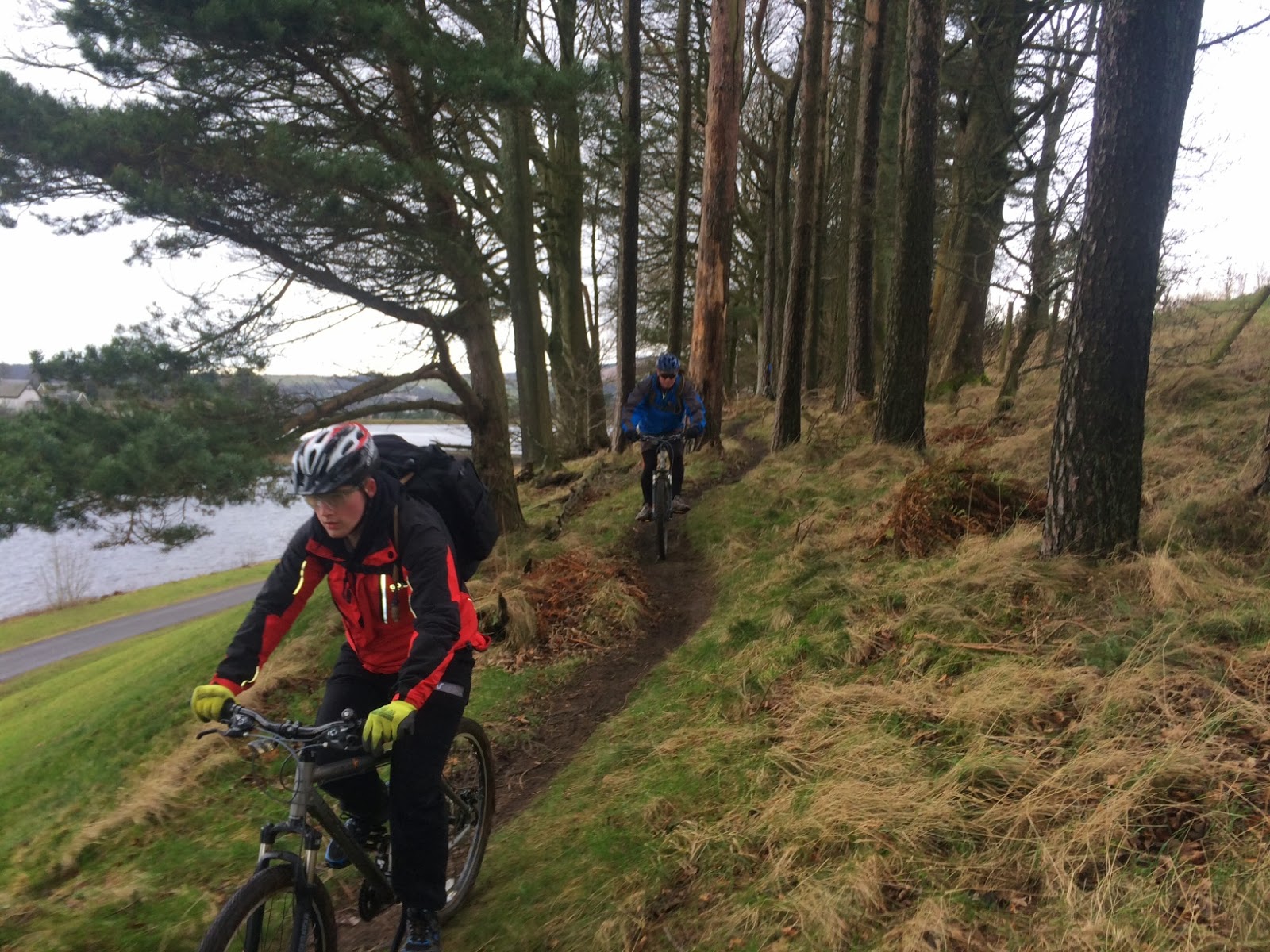 Super keen and always willing to get dirty, they learned new skills on and off the bike.  Sergeant Jaime kept them in check with his barking voice and all had an excellent few days.

The trails around Mugdock are ideal for TCL courses, with a variety of terrain in and out of remit for candidates to examine and peruse. 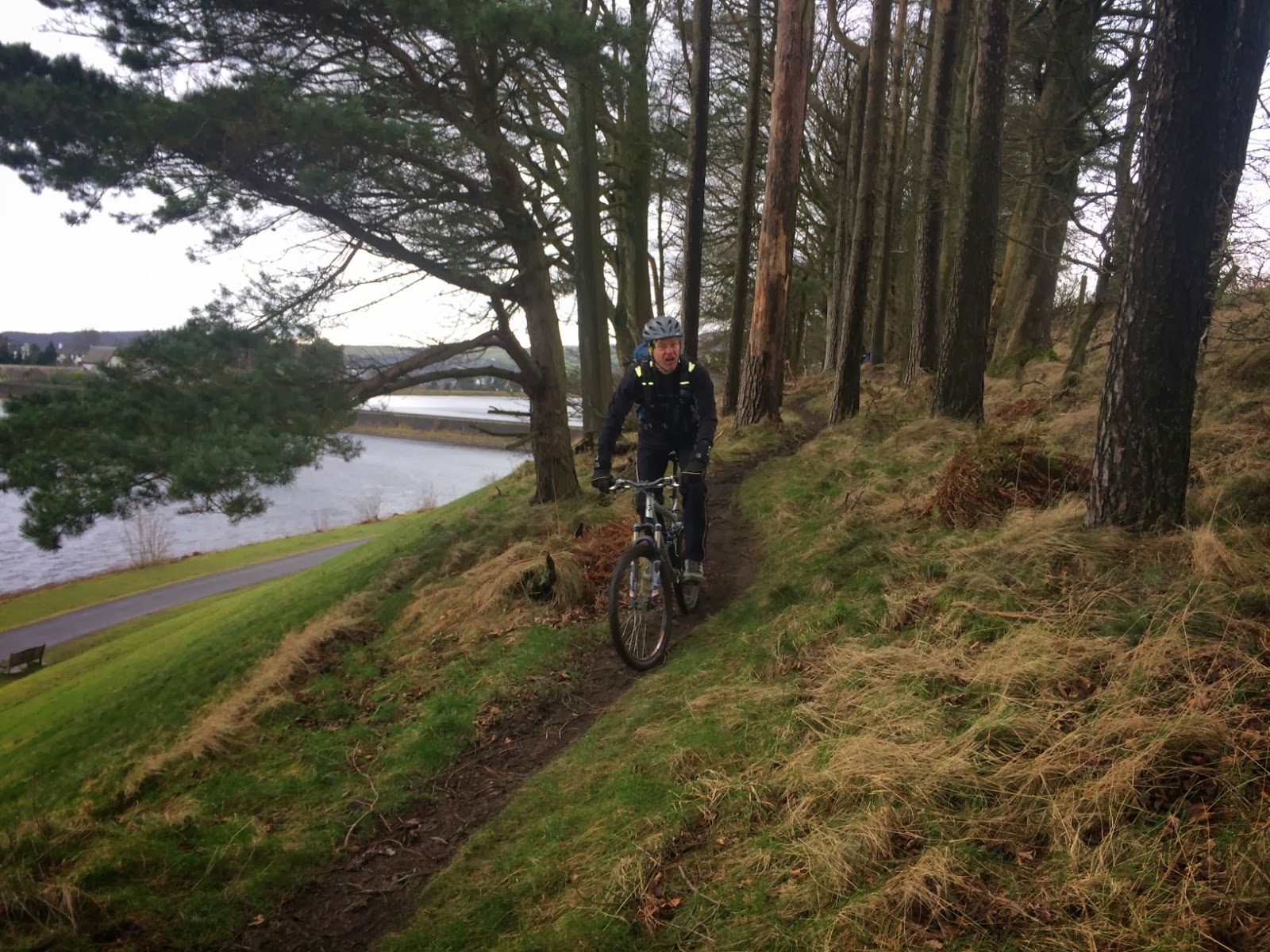 Highlight of the two days was seasoning a steep downhill braking test; unfortunately, one person declined to follow the 'no front brake' grab rule... 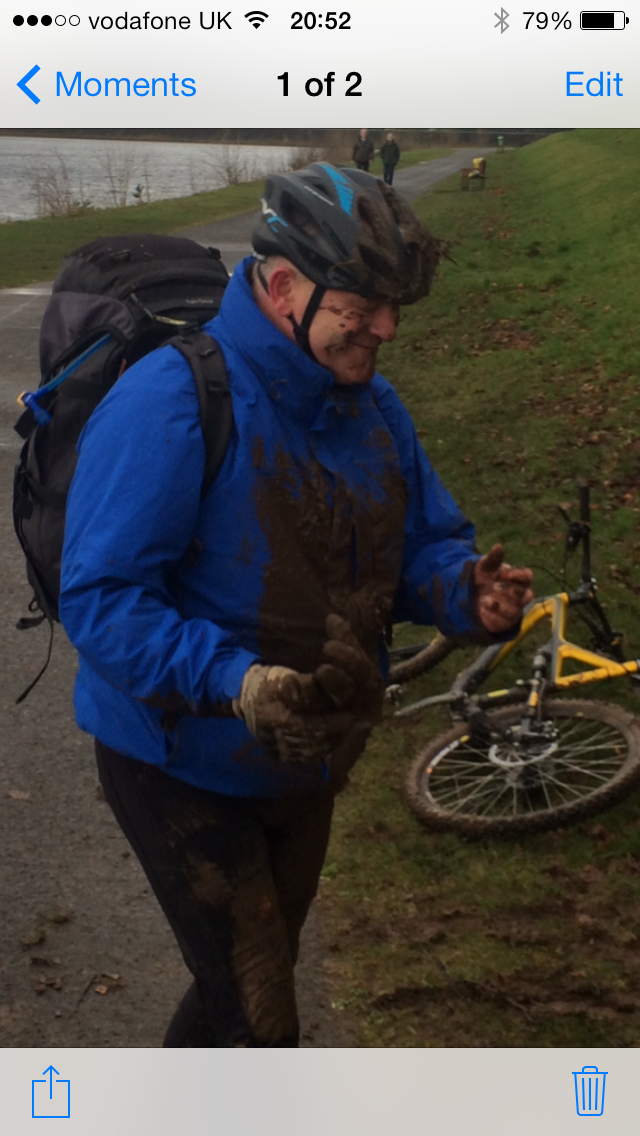 Notwithstanding, more candidates are keen to come training and those just trained are off to develop their skills before returning for assessment in early course.

Saturday saw Craig out on the hills around Comrie with the Glasgow Life group.  A lovely walk up Beinn Odhar, a Graham, then skirting to the adjacent hill saw us hitting the snow line around 500m and trudging through some thick heather to get there. 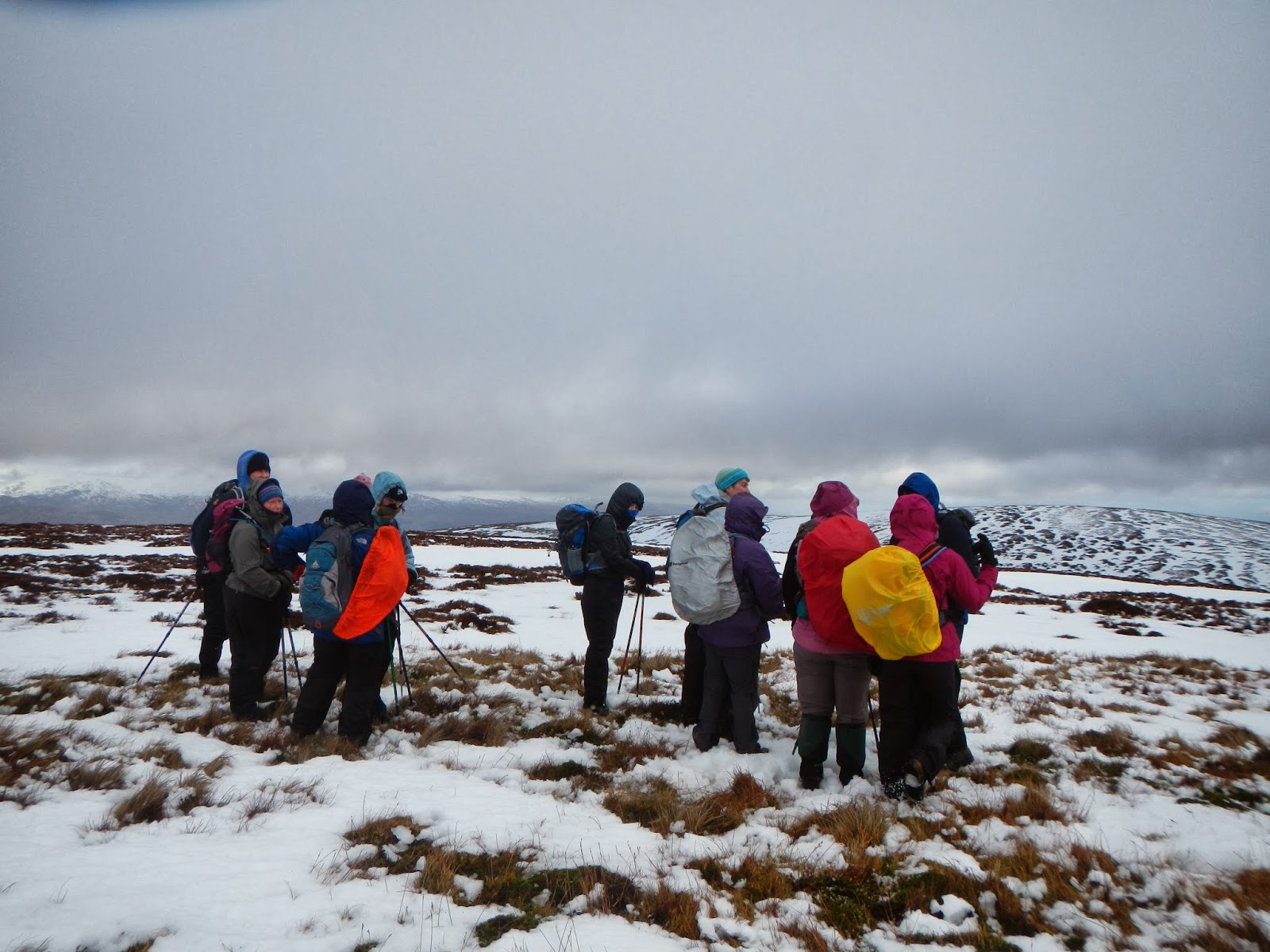 There are some lovely hills around the area, with one particular ridge line south west of Comrie looking very appealing in the snow.  We made Beinn Odhar in fair time but the wind on the summit and the proposed route west to the next was into the teeth of the snow bullets.  Common sense saw us take the winds at our back and drop down to the beallach fora sheltered, and lovely, lunch spot. 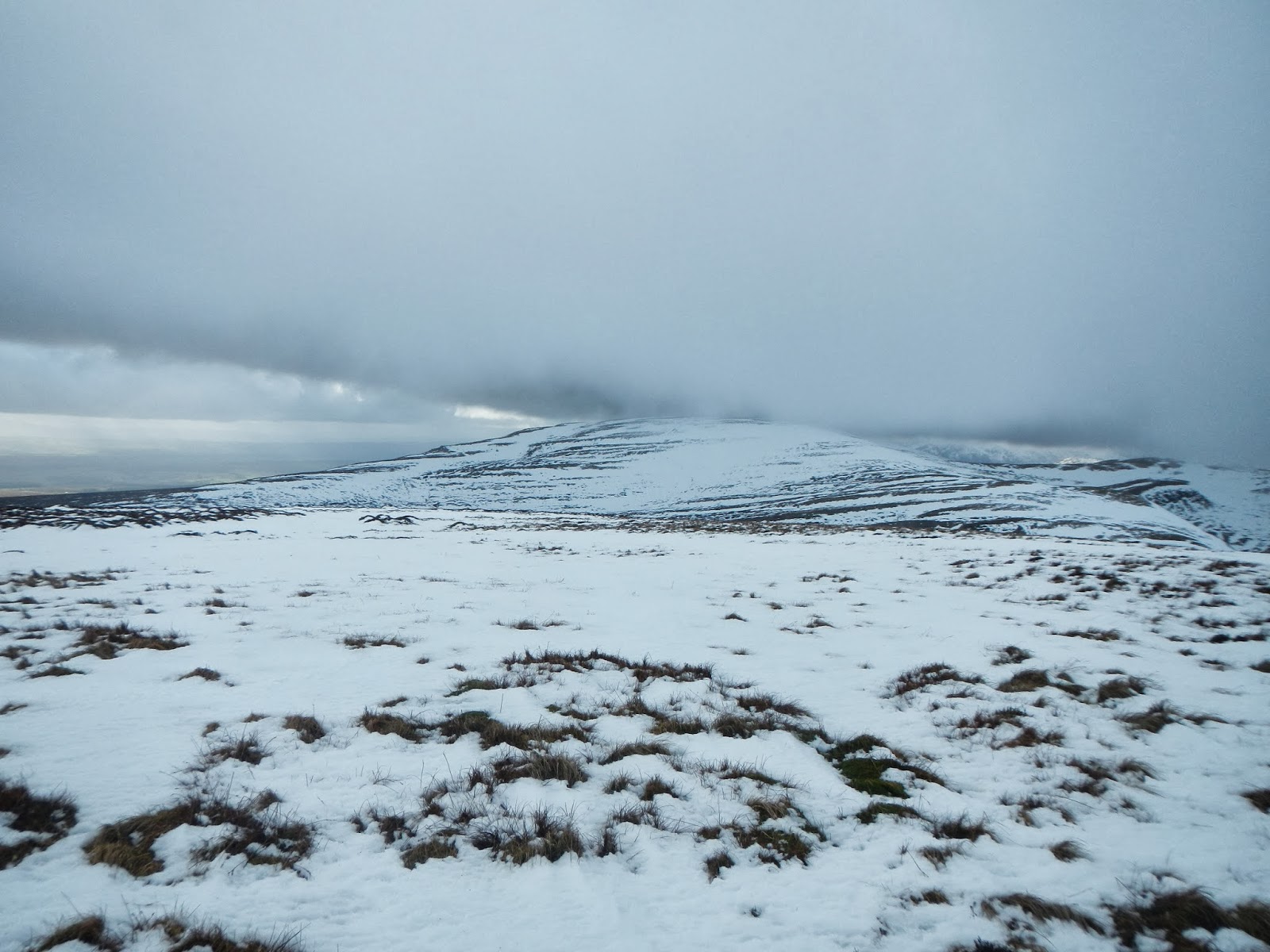 The only draw back to the summits were the increasingly, and hideously unsightly, ubiquitous wind turbines appearing out the mist like something out an HG Wells novel...there are places for these things but a new approach is needed before the Scottish hills are decimated by these monstrosities...

Anyway, turning our backs to them, they disappeared in the mist again and a little navigation was needed to gain the next top and find the way down the broad ridge line. 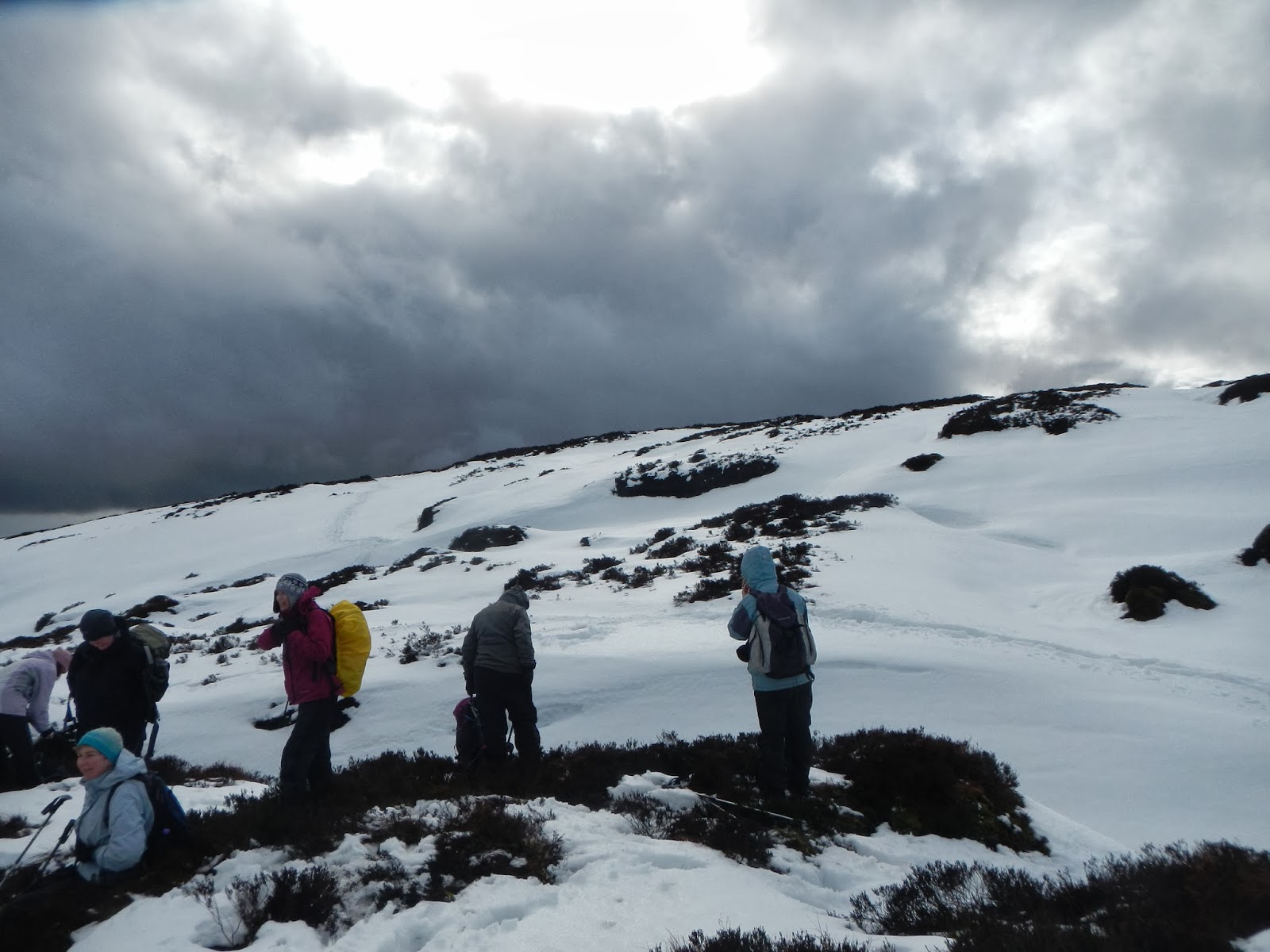 All in, another lovely day with group; I'll jinx myself but I've been blessed with most fine weather when out with them.........perpetul rain now no doubt!
Posted by Craig Coid at 08:27 No comments:

Well, some three-four years after finding his camera at the bottom of the NE buttress on Ben Nevis and reuniting him with same, I finally met the man in the flesh...and what a great character Stephen turned out to be.  Typically chatty and friendly Irish dude who even laughed, politely I'm sure, at my jokes. 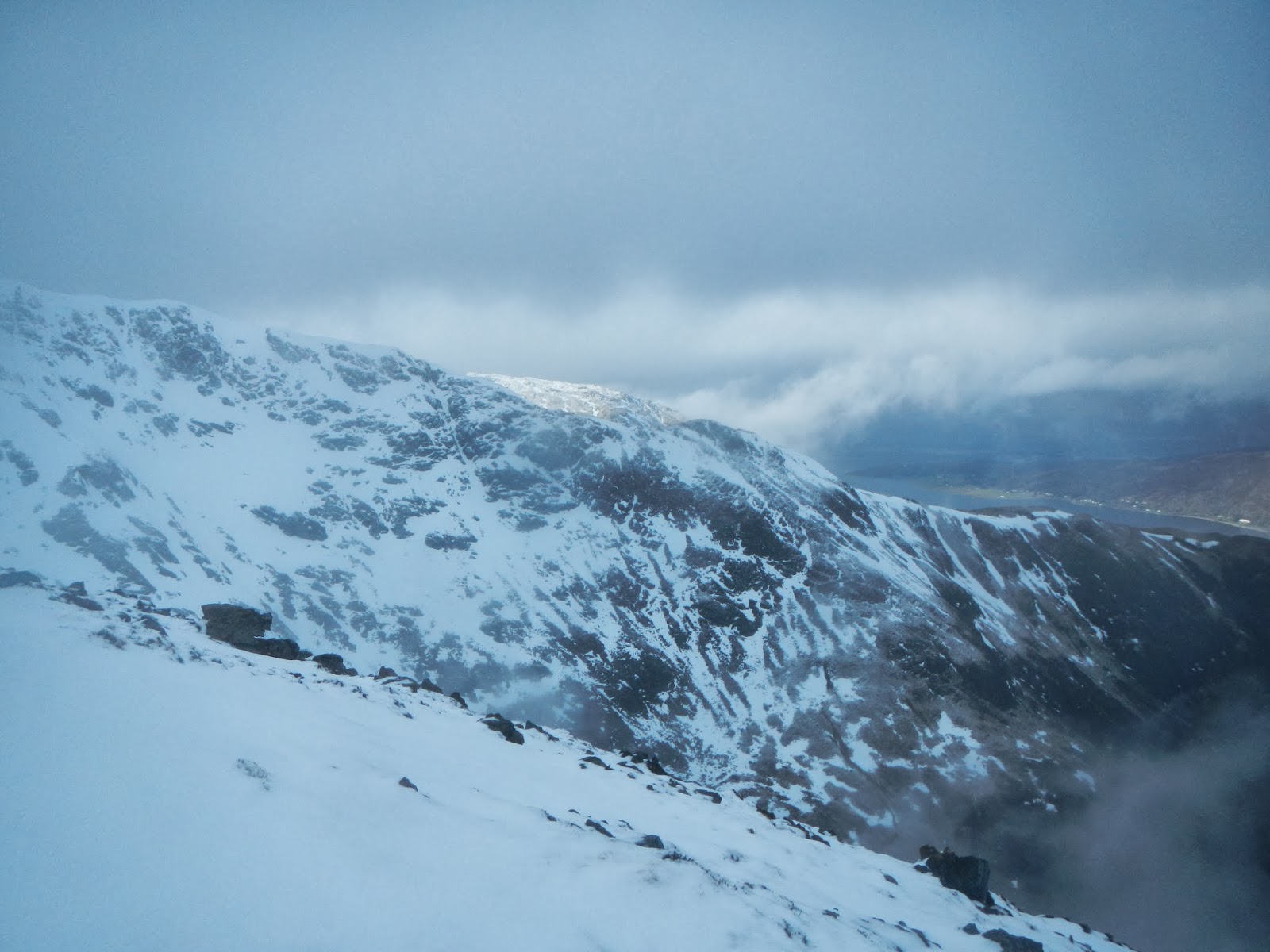 We had plans to climb something nice but the weather and avalanche forecast worked against us.  However, always having another plan A, Bill and I met Stephen at his bnb in Crianlarich and headed to Ballachuilish for a journey up School House ridge, a lovely alpinesque ridge line to the top of one of the munros towering over the village. 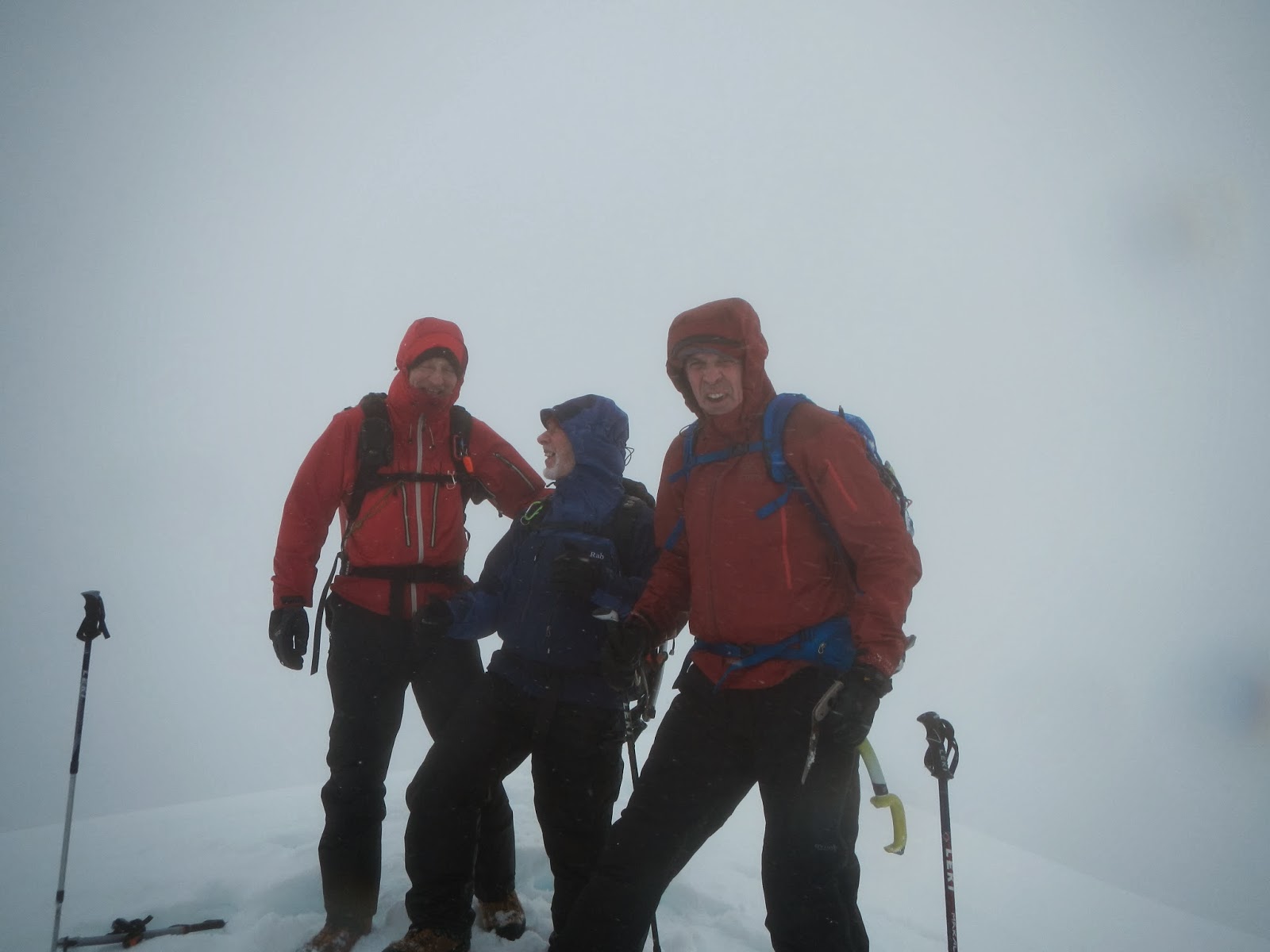 We made the snow line around 600m and breezed the steps, overtaking a youthful, if sedentary group near the summit; I recall there being a cairn of sorts at the summit but this time it is merely a snow mound with Scottish bergschrunds up and down the line of the ridge to catch one unawares. 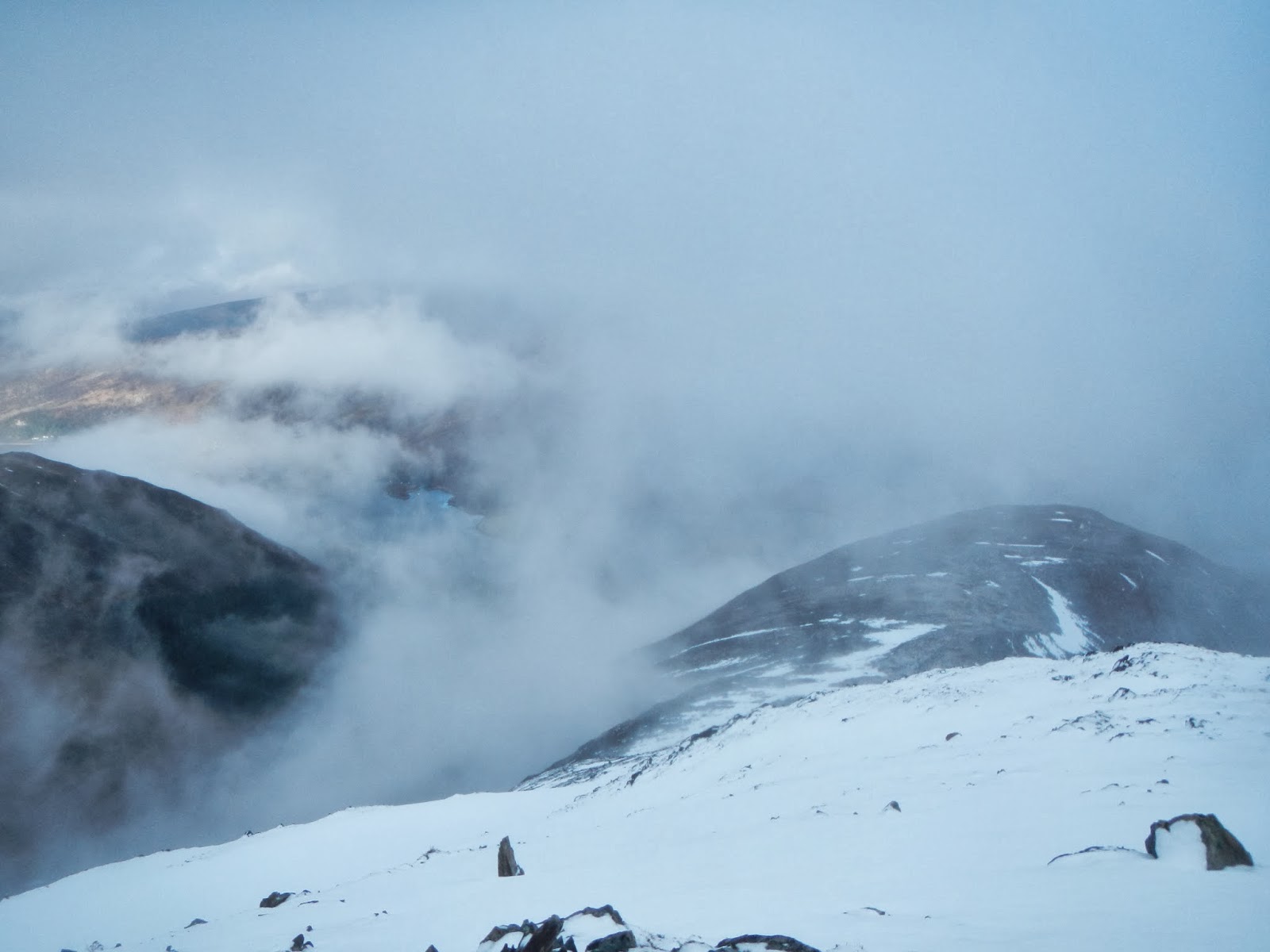 The weather held fairish for the day and entreated us to some pleasant views on the descent down the north ridge.  Back at the car in jig time, we had a pleasant coffee and cake in the Coe, thence dinner in Crianlarich.

A most pleasant day was had by all; the craic was sound, the walk 'Scottish', steak pie excellent and future plans laid.  The most surprising part of the day was Stephen actually holding on to his camera for a change (I make that number 5! ;) ) 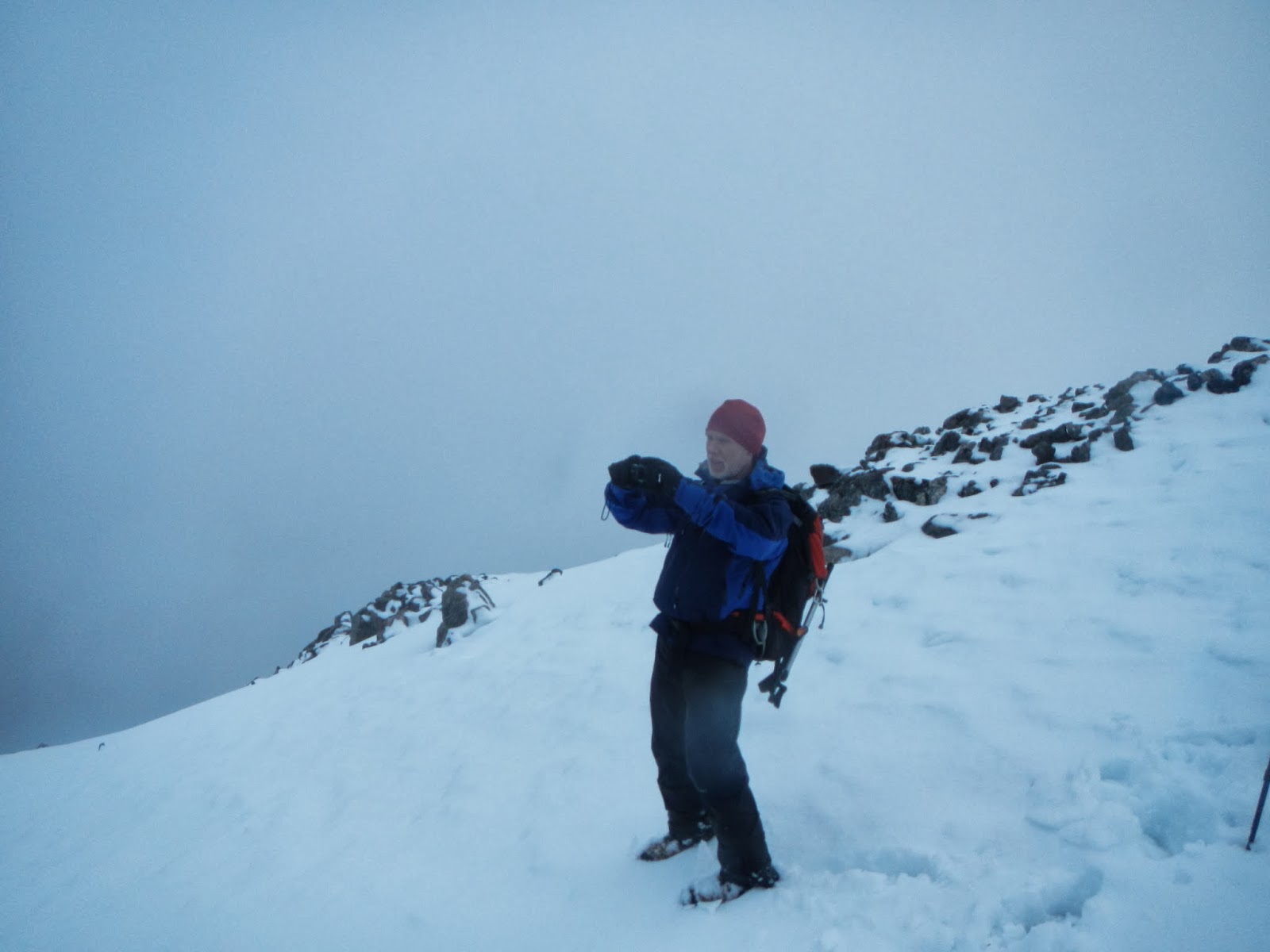 New friends, merging paths and the road rising to meet us for our next adventure - and damn soon too I hope.  A stellar Scottish day; thanks for the company Stephen. 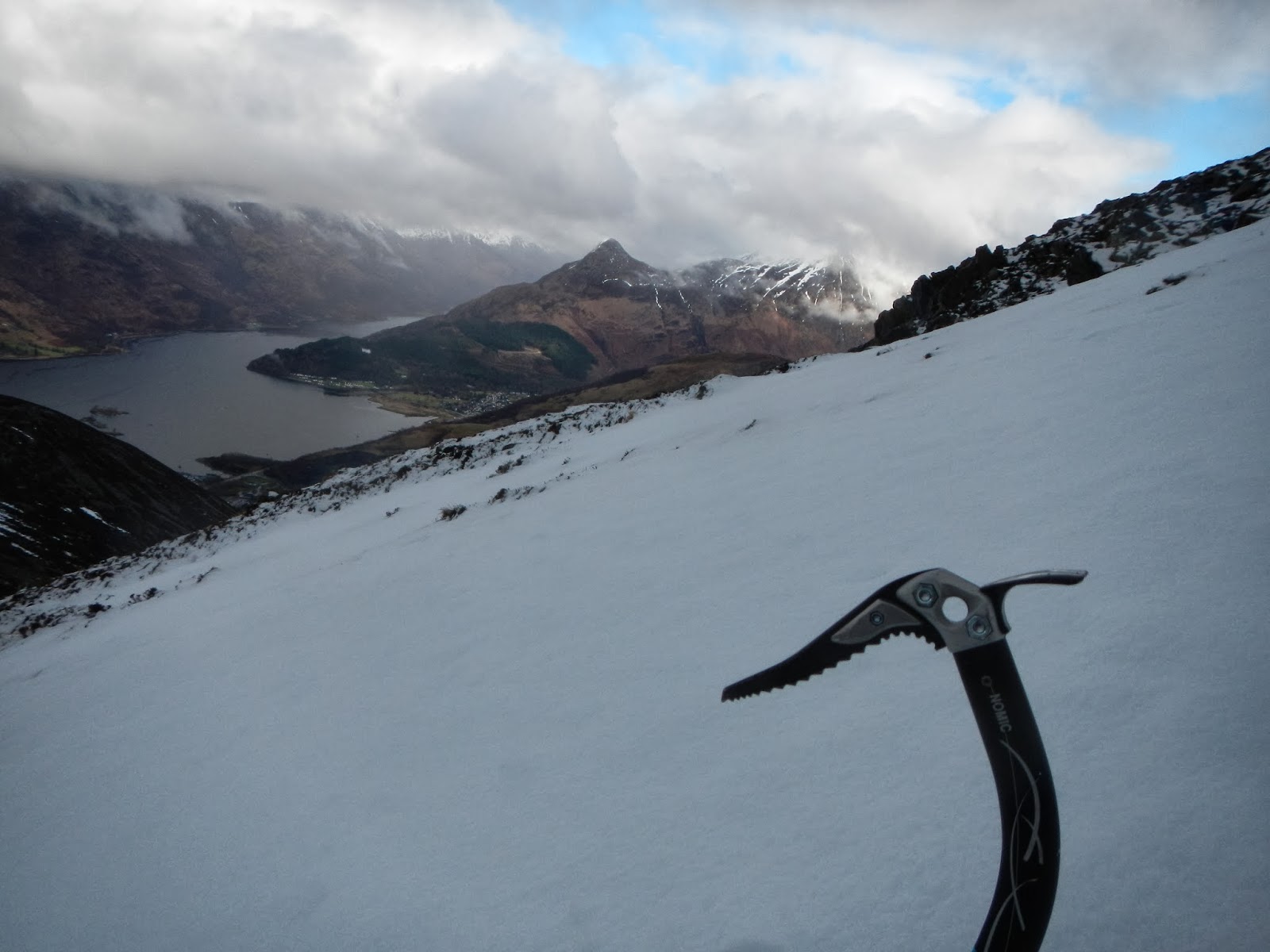