Bill was away this weekend working with Glasgow Life and took his group up Ben Each, near Glen Ample/Callendar way.

As anticipated, the weather was four seasons in a day but the ten enthusiastic members of the group huddled down with the weather and managed to get to the top ensemble. 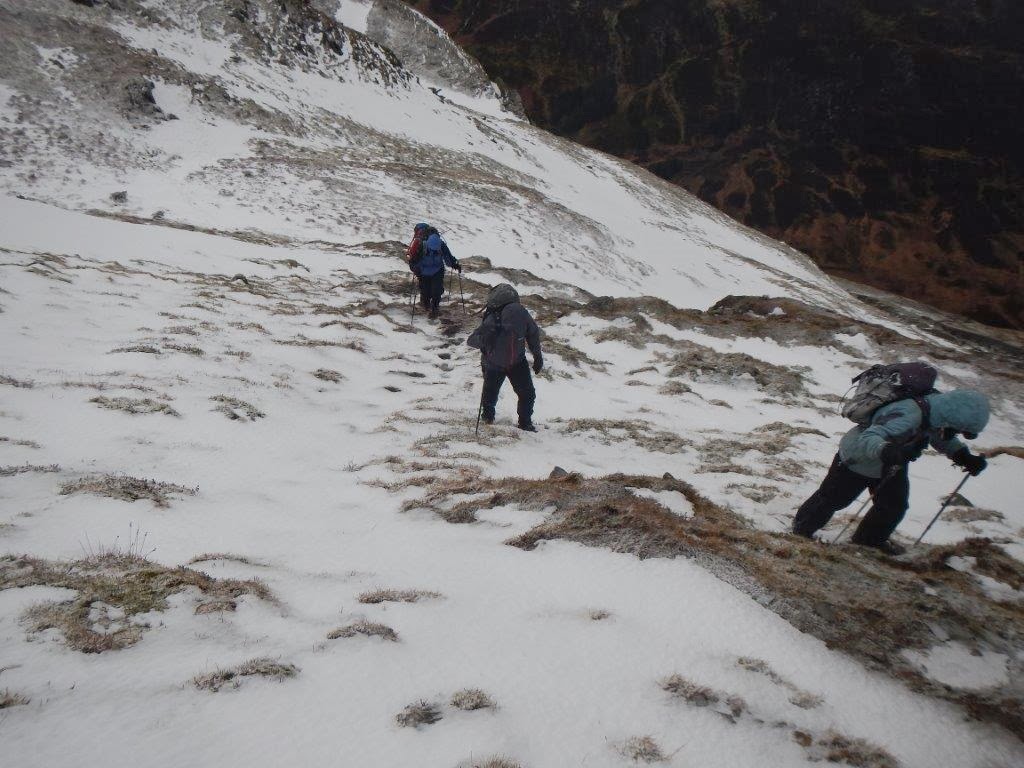 Hard work for the group who enjoyed soup and a sarnie at the top before heading off back to the bus. All in a great day for the group; many learning points for winter walking and keeping warm in the super cold conditions. 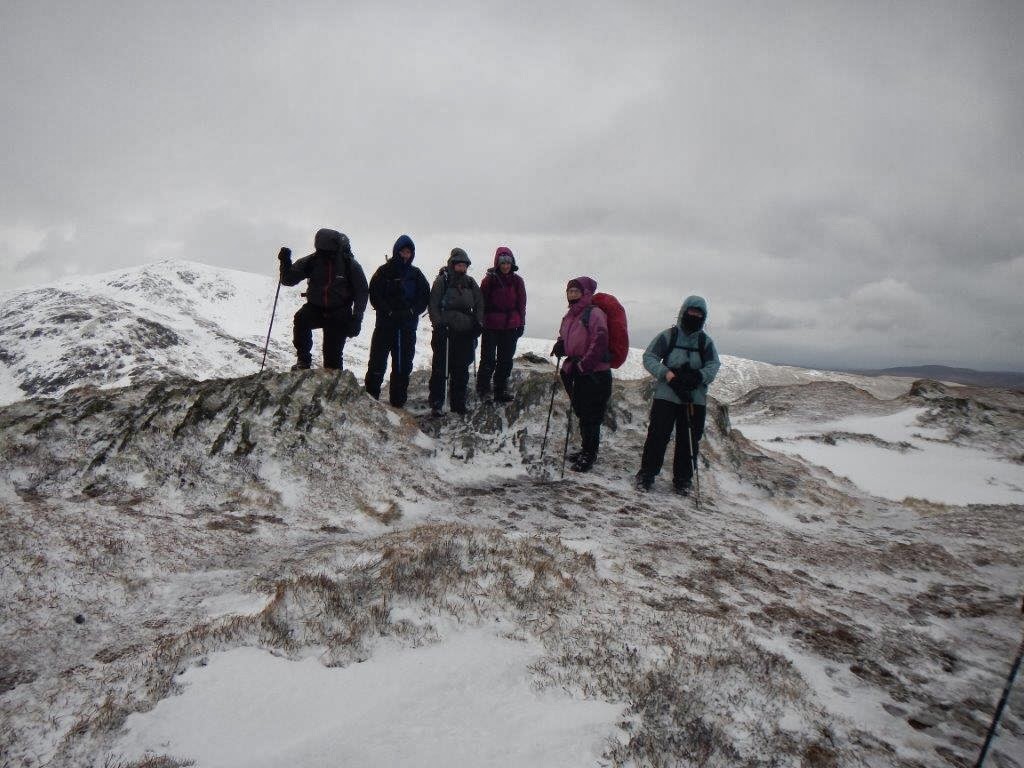 Bring on more winter please :)
Posted by Craig Coid at 14:02 No comments:

Half a cuppa - in the whiteroom

Craig and Mark binned plans for an overnighter in the Corrie Cas carpark in Cairngorms for a day up the Arrochar Alps.

The forecast was pants all over; red avalanche threats, rain/sleet/snow and high winds forecast...ho hum, much as it has been in Scotland all season...utter pants! 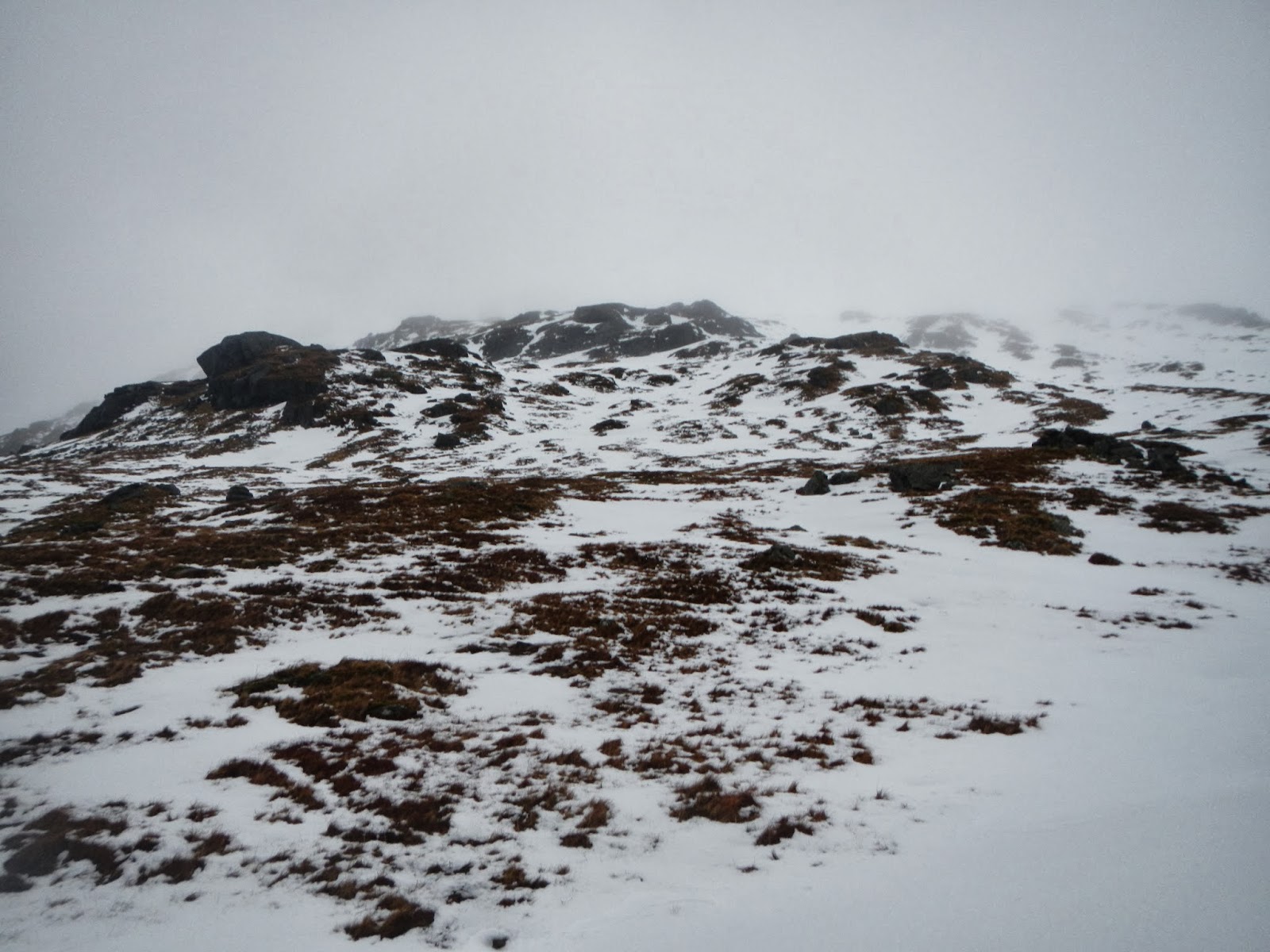 Anyway, we headed off and found ourselves at the Glen Croe carpark in the minging rain...nothing for it but to head off and see what came our way.  We headed up towards Beinn Ime, taking a path to avoid northerly aspects and suspect slopes, and found ourselves at the bealach on its SW side where the wind was swirling with gusto, and plenty spindrift, as the snowline met our feet.  We followed the blackest line we could as the snow was soft and wet lower down.  The higher we got, the poorer the vis and the wind picked up significantly. 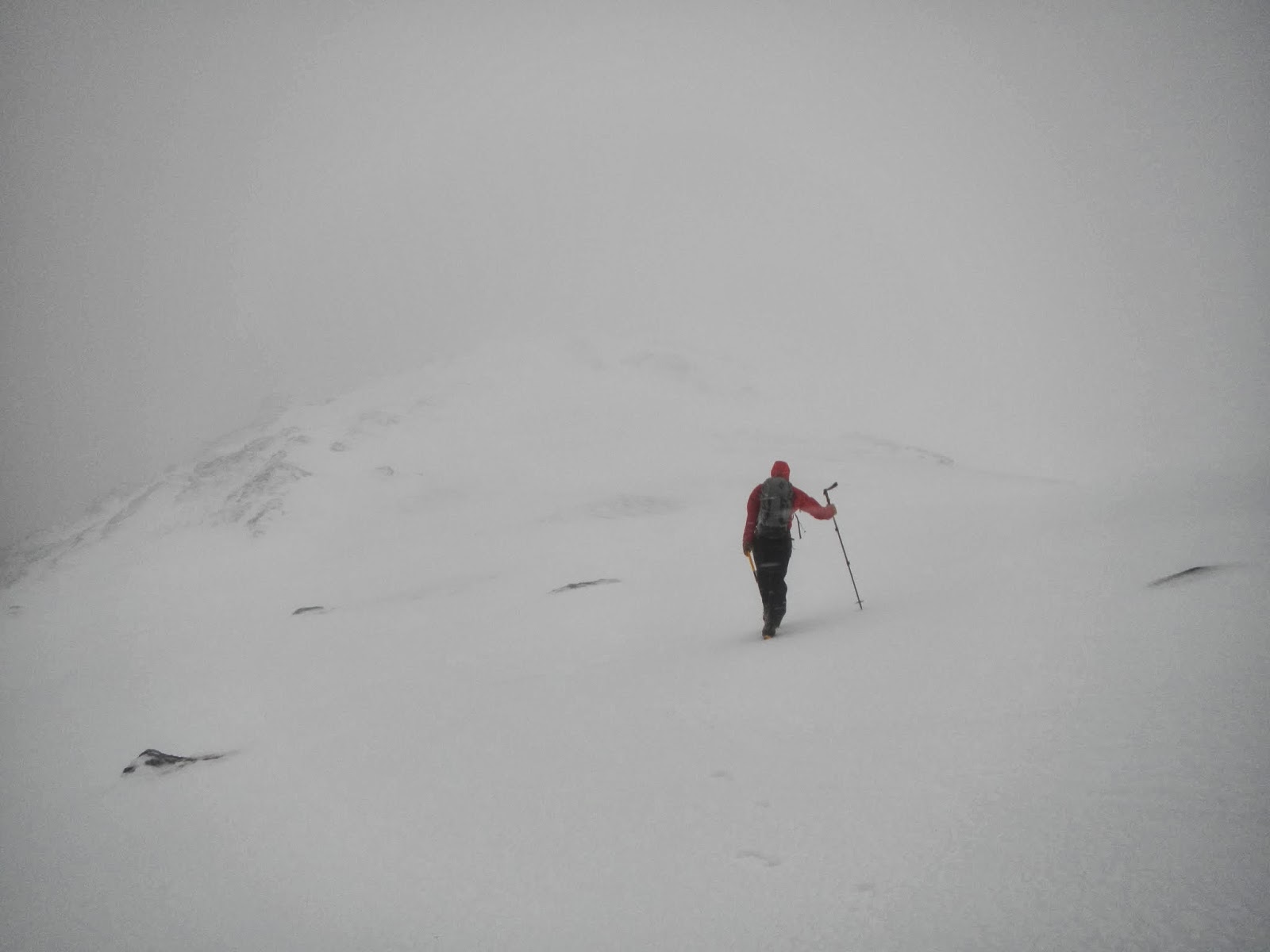 We topped out in a 'come and go' white-out, with the wind chill very cold indeed.  We took a bearing on the Bealach A'Mhaim and headed off downhill in what turned into a maelstrom of spindrift and zero visibility, with winds probably gusting to 60mph, making progress very tough.  The wind blew us off line but we were able to correct this and got in view of the bealach, our objective. 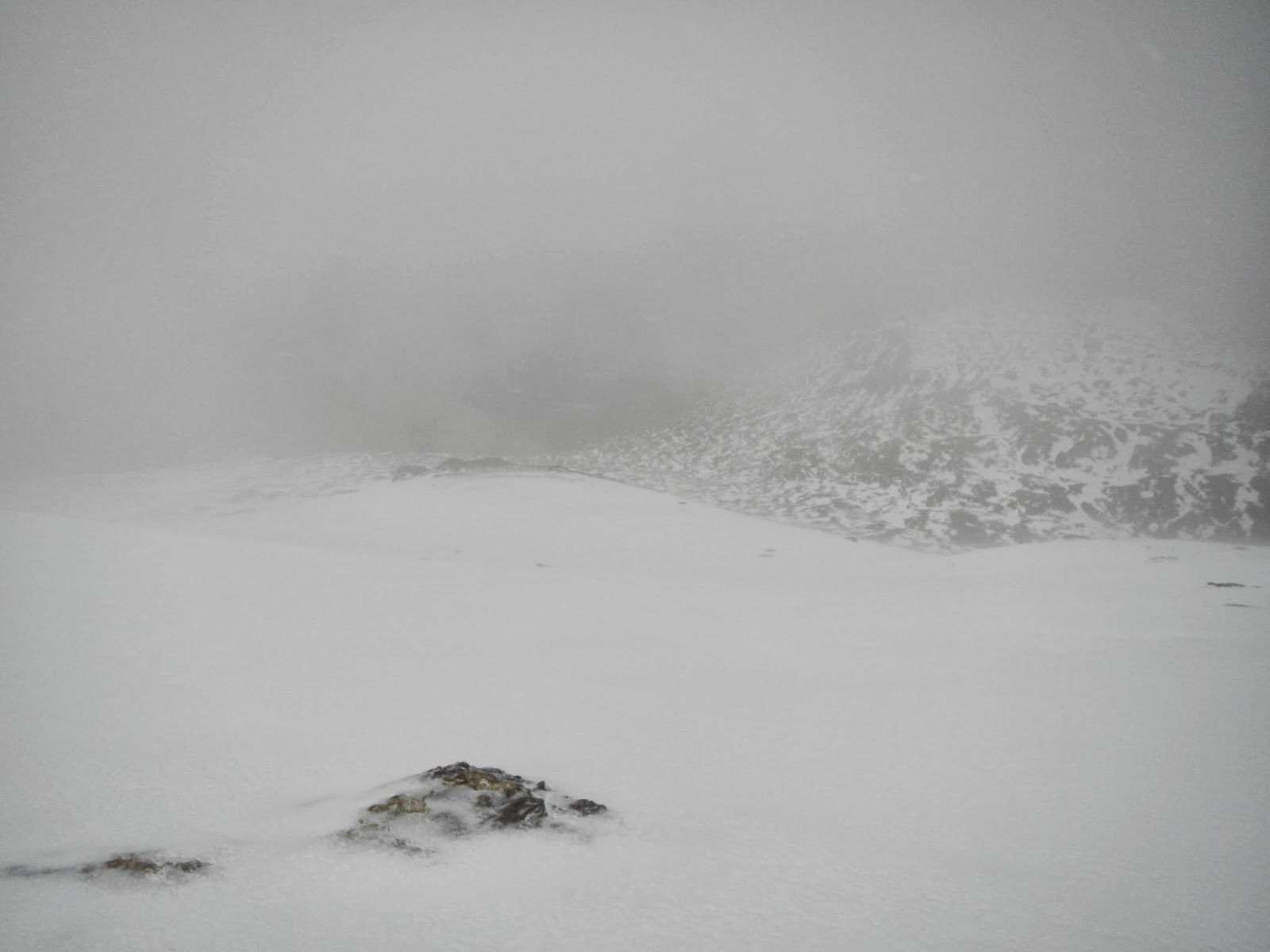 We had intended to make for Ben Narnain but the wind was truly awful and progress was difficult, so we found a bit of shelter in one of the many runnels off Bein Ime and had ourselves some soup and sarnies to get some energy in us. 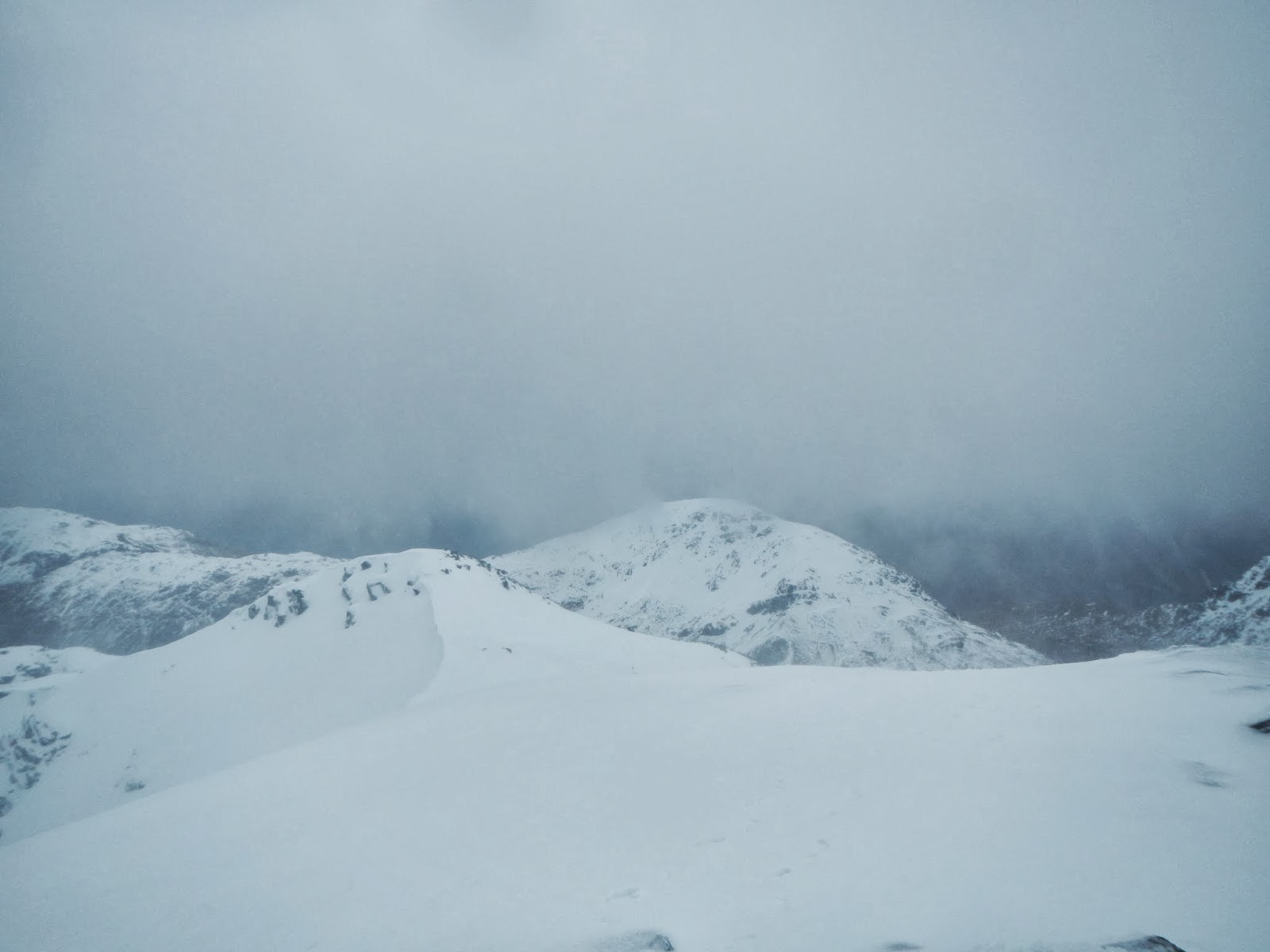 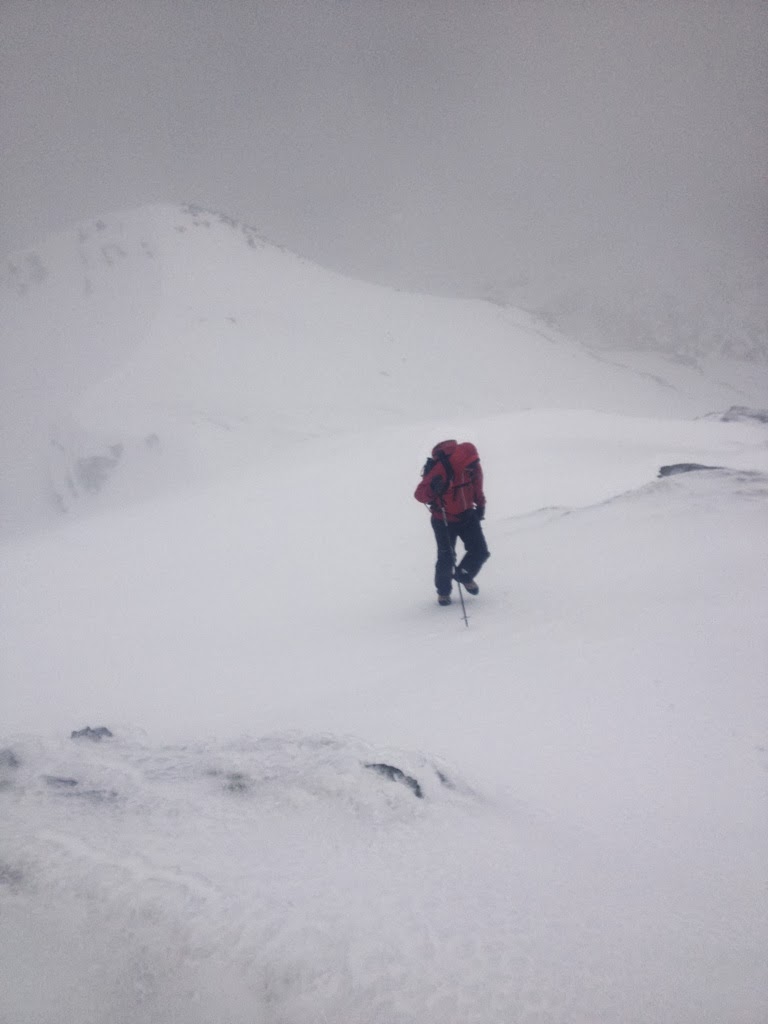 After a chat about options, weather, which wasn't improving, and wet gloves, we decided to head back for the car and had a chilling walk off the mountain. 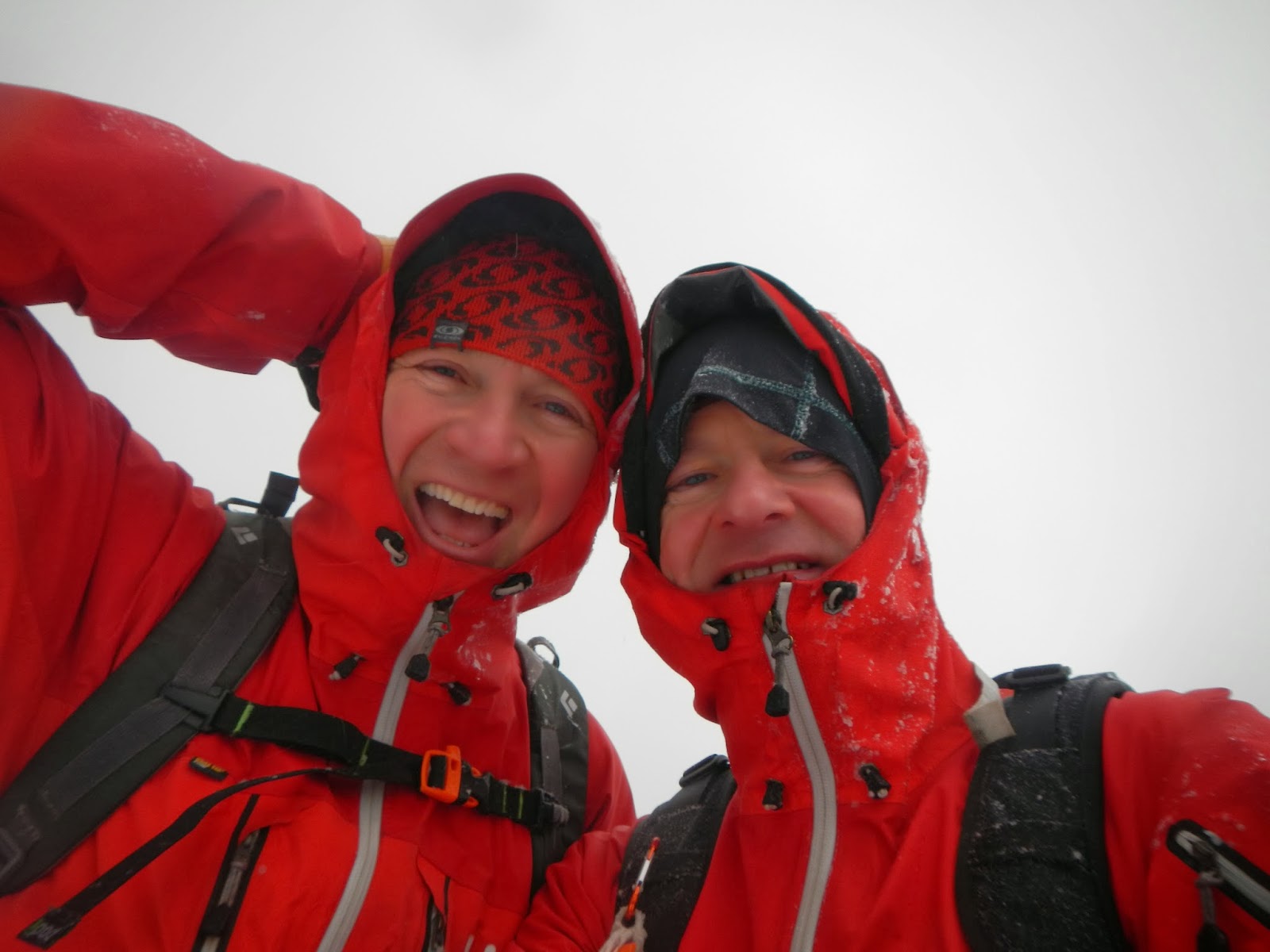 All in, a Quality Mountain Day, with solid nav required in very challenging conditions - probably one of the windiest, and whitest, days I've had in the hills - caused by the winds converging into one super strong stream after deflecting around the other mountains and being forced over three nearby bealachs.

A nice day in the hill...honest!

Ever hopeful of a decent winter climb, Craig and Mark headed for SCNL in the Coe to check out a couple of routes.  An early start saw us head off into the dark at 0715.  A steady pace to the top saw some alpenglow on the tops and a very snow corrie.

There was one other team ahead, on Twisting Gully - very bad option we thought - and there was plenty of fresh windslab which fractured with ease.   After a chat and a scan of what might be climbed, and climbable, we opted for Raeburn's Ordinary Route and struck off up the slope to the start.  There is a layer of graupel about 4" down and the pack pretty solid about 9" down.    There is certainly a huge amount of snow in the corrie; indeed, this crack/fissure/crevasse was at least 10 feet deep;


We got up asap and set up for the first pitch.  Mark took first and me second with the cracks buried or iced up; gear was hard fought and pretty thin in places, compared to normal conditions (what  are they in Scotland...)
There is no neve; a snow crust broke through mostly and the snow was very hard packed windslab or very soft fresh which broke through, so things were constantly hard fought.  Notwithstanding, we did have a good time and Mark started up the third pitch, through the initial chimney then partly up the wall but no gear and soft snow brought a sensible decision to retreat and we set up an ab directly back  down the route.
60m ropes nearly took us to the car and we got part way down the approach slopes, which at 30 degrees are just at the wrong angle to hang about on.  Thankfully we got down to the corrie floor without incident and after soup and a sarnie had a pleasant walk out.

All in, a great day with some climbing at last.  The conditions are not great and the avalanche danger remains high, requiring care and safe travel, with sound decision making.   Hopefully some better weather might bring an improvement in conditions to settle things for some more action.
Posted by Craig Coid at 02:33 No comments: