Craig and Mark have been blown about and soaked through in the last two outings but this weekend's weather brought calm and a serious amount of snow.  It was thick and unconsolidated so something sensible and worthwhile was needed to prevent a slog-fest. 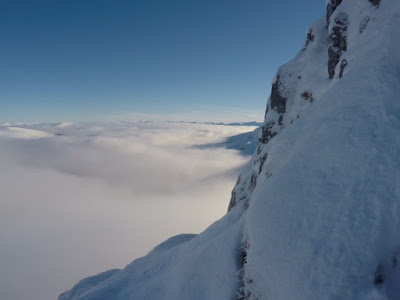 The North Buttress of Buachaille Etive Mor is a lovely IV 4 with a great approach and fun climbing in the current conditions - a rocky climb with plenty of hooks and a spectacular situation.

An inversion prevented a blue sky start but it was cold on the walk in and we noticed the early development of hoar frost around the 600m mark.  Higher up it disappeared but the inversion probably had a hand in that.  Leaving the path after Great Gully, we struck up on increasingly slippy ground and crampons were on early, which made travel much easier. 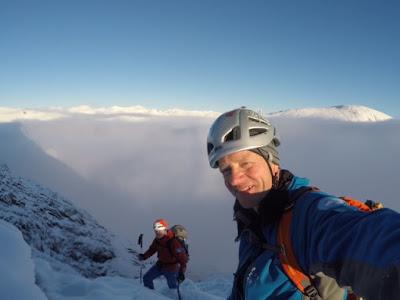 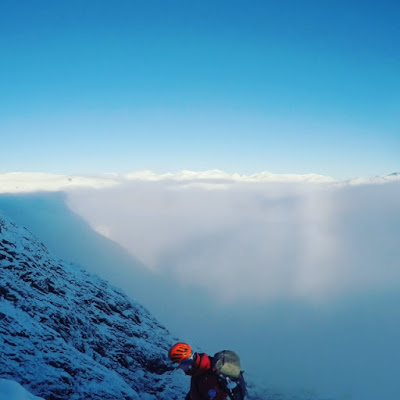 There is a LOT of snow lying on the ground and it is pretty wet and sticky just now, clinging to everything.  We arrived at the start and Mark took P1 on soft snow and unfrozen rock - care and attention was needed, especially as this was the first time out this winter. 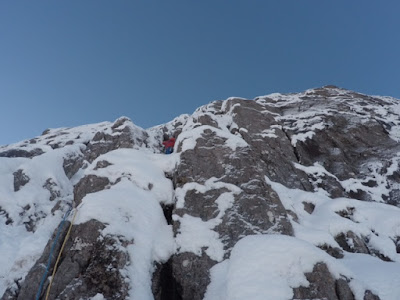 Craig followed through onto P2 and after the tricky first chimney, easier ground led to a swim-fest of 4ft walls of snow which collapsed under each step.  After struggling manfully for 30m on the easier ground, common sense prevailed and a down climb to a good spike settled our high point.  Mark followed on and, once safe, a sarnie for lunch seemed as good an idea as any. 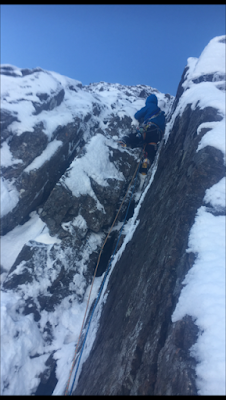 Thereafter, the first of this season's abseils was executed, taking us 120m down in 2 abseils, thence a walk out to the path and the car.  All in, a great day out; good choices and decisions saw a successful first winter day for us.

Worth noting the weather above the inversion was stunning; the summit shelter on the Ben was visible with ease and it was a true white winter wonderland for 360 degrees.  More of the same please. 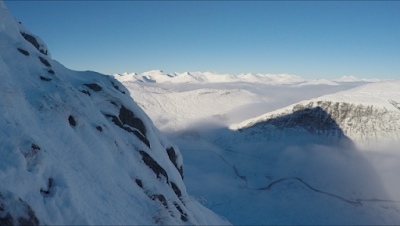