Craig & Mark have eyed Left Twin on Aonach Mor for more years than they might wish; it always seemed the classic III ice route on the crag to us...within reason anyway.  The time never seemed right, with queues or crappy conditions but this weekend, with two routes in mind, one was going to be Left Twin.

Up on the third bin up and first to the top ski hut in increasing wind, poor visibility but what looked like good conditions.  A long dry settled period had scoured the hill and faces and removed any excess snow.

Dropping quickly into Easy Gully, traversing along the bottom of the cliffs showed some ace conditions and many pure ice routes on show.  We picked out the obvious line of Left Twin and set off after Craig pleaded with Mark for the first pitch - genuinely not realising it as the only real pitch of the route :)

The climbing was on first placement ice with fat ice taking screws very nicely when needed.  It felt well steeper and sustained than a grade III, and we both felt it merited a grade harder, though pretty much a long single pitch as compared to multi-pitch.   Once over the lip, it was easy ground to the easy exit through the cornice and a belay off the wooden stakes.   A quick sort of the ropes, a bite of lunch and we were off again seeking more action.

We had the guide book out and went looking for White Shark - a good looking IV 4 ice route on Central Buttress.  After some head scratching, we followed a lovely ice line up steep ground, following a rope well ahead of us.


Mark was moving onto the steepest ground when a rope landed on his head!  A few moments later, the pair ahead were bailing off the route onto Mark, who thankfully found a peg and fat ice for a screw.  Once clear, Mark headed off on very steep ice to the triple peg belay; on reflection, we think the pitch might best be finished following the steep corner over the lip rather than leave the next with an awkward down climb traverse onto the face. Either way, a great lead by Mark!

We both agreed the pitch was easily worthy of grade V and wondered if we were on the wrong route. We checked the book again and although some things matched, the peg belay got no mention and the route description was fairly short and vague - though the topo looked ok.

Common sense being the better part of valour, we decided to ab off (not really knowing what was ahead) and a slick set up saw us off the route and walking into Easy Gully in quick time.  We collected our bags at beneath the ski hut and, after losing a yellow waterproof bag to the increasing wind (if found please return to owner :) ) walked off for the bin down.  Much to our disappointment and my knee's displeasure, the bins were off due to 94mph gusts and we had a long, slow descent to the carpark...grrrrrr!

All in, a great day on super ice.  Pity about the bins and the wind but it helped create the conditions we enjoyed.  And the knee is still holding out, despite the walk out!  Oh, and it transpires we were on White Shark...not a IV 4 on the day, that's for sure!   Worthy of a return though, as we did all the hard work, with easier ground above.

Bill is delivering TCL courses over the next couple of months in Glasgow and Aberfoyle areas.  The dates are listed below, so get in touch if you want some first class biking instruction, training and assessment in Scotland's beautiful outdoors, including some riding around the new SXC/Commonwealth Games race venue at Cathkin Braes.

If these dates don't fit in with your busy schedule, get in touch and we will see what we can do to get a suitable date sorted for you.

Bill will also be running Night Riding and Expedition modules in the coming couple of months - give us a call if you want to get a date sorted ASAP. 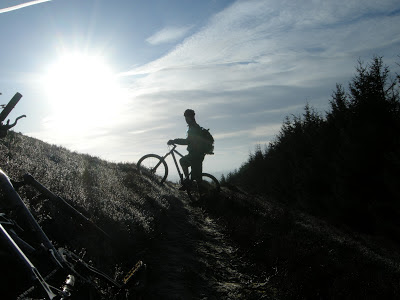 With Bill delivering a bike mechanics session in Auld Reekie, Craig's first big outing since a bad knee diagnosis (Osteochondral Defect...hilariously known as OCD) saw him and Mark head for the Coe with Shelf Route in mind.  A stop off at the Jacksonville car park showed a fairly bare looking Crowberry Ridge.  We thought the hard pitches required a bit of neve assistance (for us anyway) and the binoculars showed a fairly bare looking route.

So, undeterred we headed for the Hurt Lochan, which is usually more reliable, being a little more sheltered from prevailing westerlies blowing the snow.  A steady pace up the path saw us make the lochans in about 1hr 15m but glorious clear weather gave way to a bit of a white room with the cloud moving in.

We kitted up and dumped bags at our usual luncheon stone but the view to the route was not to be seen.  We headed up in what we thought was the right direction but ended up right of Crest Route...miles off target!  A quick shimmy across saw us finding the buttress and Mark was off up the first pitch, in pretty reasonable nick.


A slick change at the stance and Craig was off up the second pitch, usually a short easy traverse and short groove to the snowy ridge line looking into NC Gully.  Sadly, an overnight inversion had softened the neve into a mushy pack giving a real lack of confidence with foot placements, many crumbling when weighted...aaargh.


Mark took pitch three which is short, like the second, but usually has a meaty exposed rising traverse but today felt very secure, with good placements...maybe we just know the way now after a few ascents, as it is easy to go too high into harder ground with no axe placements.

A quick change over and Craig was off up the third pitch, hoping to run it up to the top with 60 m ropes.  Height gain provided better quality neve and secure placements and Craig ran it to the top, enjoying the many steps up the ridge.  This is a really nice pitch; never too hard, great exposure but gear available in all the right places.  A solid block belay at the top saw Mark up in jig time.

A quick handshake, lunch on the move and an easy descent down Broad Gully saw us back at the bags in early course.  Stripped, booted and suited for the sweat fest back to the car saw us make the Disco in under an hour.   Crisps and cheese scone kept us going to a dinner of fillet (for Craig) and duck (for Mark) both cooked on the webber.

A great day out.  Craig's knee stayed unexpected stable and pain free.  Good climbing to build some confidence for more routes to come.