Craig and Mark headed for Glencoe after a late plan to get out on Wednesday.  The weather was really pants but a day out is a day out.

Glencoe looked whiter than expected but warm fronts and heavy rain guaranteed no ice nor frozen turf...a mixed route was needed.  The North Buttress of the Bookle looked as best as they might get so they headed there for a look see.

The walk up the 'path' after Great Gully was a climb in itself and half way up they donned crampons and the axes were out.  Craig takes the story...

'Sketchy slippy rock was a challenge at times but we got to the stance in reasonable time after the crampons were introduced.  I took the first pitch which had no assistance from snow or turf.  It was a hooky affair with some difficult moves but plenty of good gear; it was a longer pitch than I recalled but maybe that was just imagination...or fear??   The graupel showers filtering down the face were the worst I've ever seen but it all added to the atmosphere.

Mark dispatched the second pitch in similar style with purely hooks and the occasional wobbly rock.  We continued on and Mark finished the final chimney which was a bit thin to say the least.  A quick set up and we were off down the first abseil followed by a second to the lower platform below the first stance.  From there we traversed to the bottom of Curved Ridge and made good time back to the car.

All in a good day's climbing but winter, although looking nice, isn't quite in yet in the Coe; a good freeze thaw cycle is needed before the next 'storm' strips everything back.' 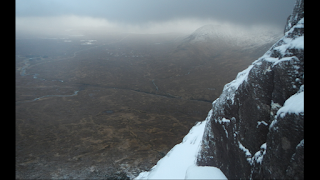 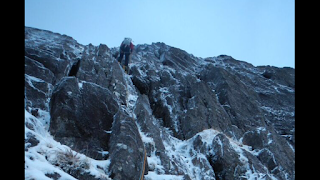 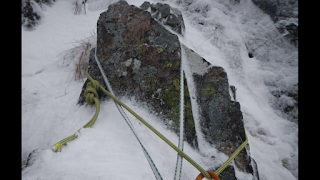 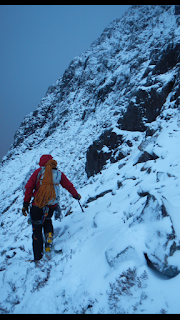