Saturday 04.50hrs saw Craig and Mark heading for the Norries with The Seam on their mind and a report the ski road was closed to the carpark the day before.  So with some trepidation, we were happy to see the gates open tho the drive to the gates from Aviemore was rather sketchy. 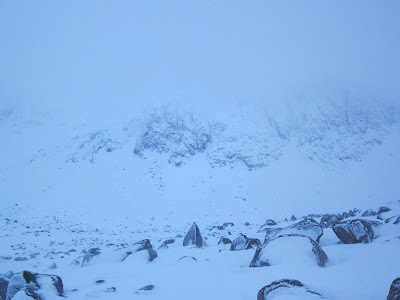 No faff saw us off into the corrie and into an increasing cold wind, softish snow and a meandering path to the boulder field.  The cliffs were plastered with snow but the temperature was probably hovering just above freezing and most of the snow remains soft under a crust, making walking unforgiving at times.

We cut directly towards the buttress but a party ahead made it to the first pitch a couple of minutes before us but one dropped their glove down the hill and we were able to retrieve same and they were kind enough to let us climb thro :)

I led the first pitch finding conditions pretty naff, with little neve and everything plastered, making placements very time consuming; there was a very long run out before the first gear and the pitch took some time.  The wind and spindrift was increasing, and the soft snow and generally poorish conditions put us off The Seam, so we continued up Invernookie, which shares the first pitch with the Seam.


Mark headed off up the next pitch with two nice moves over short tricky pull overs (not a jumper) in the soft snow and found a good belay short of the wall.   I led off up the third crux pitch with the move around the wall above the belay interesting in the conditions; finding protection was time consuming and a piece of tat was handy, tho I'm sure entirely psychological!   This is a lovely pitch which can be taken all the way to the top but we like using the cave to belay to give each a fair share of leading. 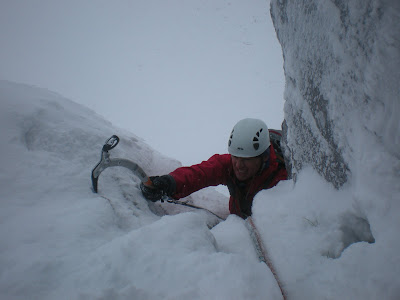 The final pitch starts with an airy traverse on the snow, wondering what's underfoot but Mark topped out into a biting, howling wind we were largely protected from - from having good comm's on the way up, Mark could hear nothing and three tugs on the rope indicated safe to go.

We headed off towards Fiacaill Ridge, which involves a snow traverse to the low point on the ridge's notch and down slabby snow build by the prevailing wind, although it was not thick enough to cause concerns.  Out of the wind for the first food of the day a cup of Heinz Tomato soup saw us refreshed for the yomp to the car park; started in the dark and finished in dusk; it is always a long day, hard going but immensely enjoyable :)


The Seam will definitely get a visit from us this season but sadly not for now.   Hopefully conditions continue to improve and the neve builds up with a couple of freeze/thaw cycles; the route was in better condition than our earlier visit but the digging for runners was a pain, tho good for body and soul no doubt.


There were some other parties out but the corrie was surprisingly quiet given the general conditions; a route on the LHS of Fiacaill Couloir had a couple of parties on it - checked Allen Fyffe's Cairngorm book but the routes isn't in it...will need to check it out, as it looks nice :) 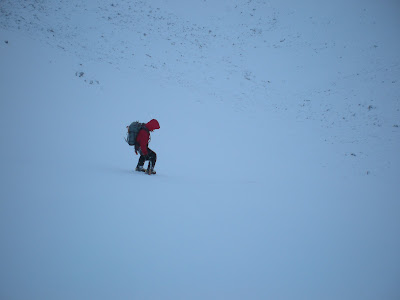