Acapella in the Snow

Craig and Mark were out in the hills for the first winter climb of the season, whilst Bill was working for Tayler Made Adventures.

Cairngorms was the climbing location and there was an alpine start and arctic conditions to get there; 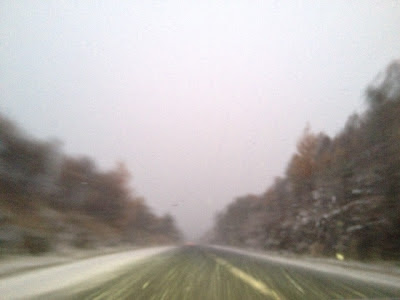 Eventually arriving, we headed into the corrie in cold windy conditions with plenty of snow about;

We had our eyes on Invernookie 111,4 which takes a line up the RHS of Fiacuill Couloir (number 6 in diagram); we take a picture of the route and route description on our iphones - technology is wonderful nowadays... 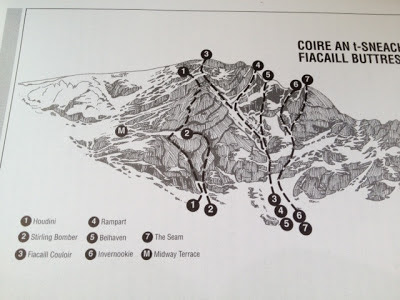 Sadly, my Nikon Coolpix 5000 died a death after some years of abuse (drop and survived many times) but it is now officially deceased have to look on ebay for a good deal...so all pics are from Mark.

We found the start with a team ahead and one right behind, so things were a bit slow for everyone. opting for the direct start on the right before entering the start of Fiacuill Couloir; this has some meaty moves with little for foot placements in the thin conditions and Mark led it well for a full rope.

Next up, I led through and met the team ahead, with more moves on steep walls with nothing for feet. After waiting for the team to move off, I brought Mark up and he led thro' to the cave near the top  - this was the crux pitch with hard moves for a 3 IV in the conditions we felt it was more 4 - good lead :)

I then topped out with a delicate traverse in the powder to a final crack move to the top with the usual absence of foot placements (see pic below).  A team on the Seam to our right were having a great time too - that looks a very attractive climb for another day.


We headed off over the plateau to the Goat Track, being buffetted by strong cold wind and spindrift on the way and made our way to the car to complete a great day for the first climb of the season.

Near the carpark, we met a group from St Andrews out doing a photo shoot for an Acapella group called "The Other Guys" - we asked and were given a rendition of their Christmas Carol, which was great!  Good luck to them.

More to come, and hopefully the early snow is a good indication of an excellent winter.

Bill has 2 more TCL training courses running over the next 6 weeks. If you have aspirations of becoming a Mountain Bike Guide you need to get on the programme ASAP. Call Bill on 07717 005 803 for details.