The Winter of Our Discontent !

Forgetting the guide book is never a good start - I take no blame - so we headed into Stob Corrie nam Beith to see what look in, climbable by us and fun - Sunday 19/2/12.   We walked to an ice line we saw a couple of years ago, somewhere near the Sphynx.  It was super cruddy, brittle and unprotectable with screws or nuts.  Mark had a look at it but it would be a full 40m unprotected pitch, which although it looked ok to start off, we couldn't see the top end of it so decided to look elsewhere. 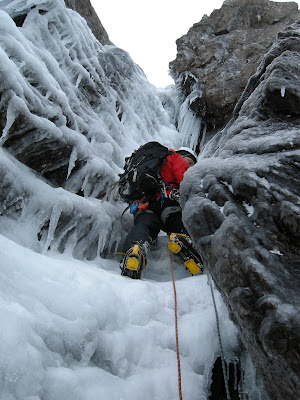 We wandered round the corner and soloed up some grade 2 ground to a shelf then saw a nice short ice line which I led up at about III - much to Mark's chagrin but he had his chance on the first pitch.

We then looked to the top and headed off up a ramp to a great view point; 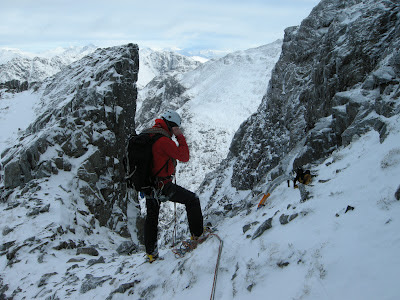 We then saw a narrow chimney up to a steep wall which seemed the way to the top and headed up into the wide chimney to a cave of sorts with a steep wall on the LHS with a chock-stone of sorts to overcome to get over the crux.

It was pretty thin looking and steep (maybe IV 6 pitch?) but easier in better conditions.  Mark took the lead and headed off with some classy moves and bridging to get over the crux but the conditions were damn thin with only two reasonable axe placement and plenty of rock getting hammered.   The crux pull over is very exposed with no protection in and hats off to Mark for nailing it. 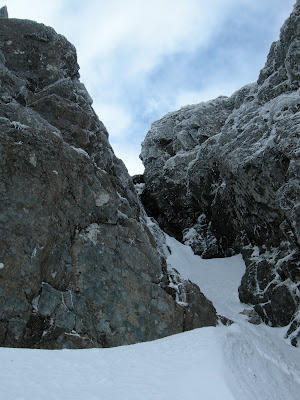 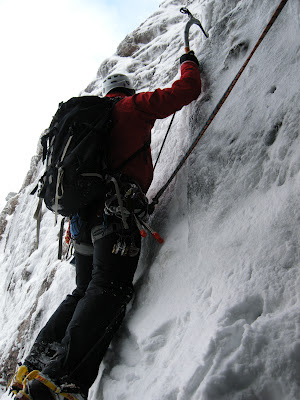 Mark on the final steep wall, with crux further above

Once we were over the crux, it was moving together to the summit with one or two nice moves  but generally easy ground.  We topped out to cold winds but great views; after a sarnie and obligatory soup, we were off to the car with a bum-slide and a rapid descent in about 1hr 10mins from the summit.

All in a great day tho we have no idea, even having looked at the guide book, what we climbed...if you have any clues, let me know plse.

The avalanche report was 'considerable' but we seemed to avoid the worst of any windslab about on the N to NW aspects, although there were one or two areas evident and hasty-hand snow pits showed a fairly  insecure top layer of about two inches in places.