Over the Christmas period, the team have tried to get out and do some stuff but generally the weather has acted against us.  Despite that, we got out a bit, got wet, climbed a bit and had fun.

Craig and Mark got out and swam up the Zig Zags in Glen Coe...a fun 'go to' route in poor weather and it was poor that day with water gushing down the route after a turbo thaw.

Next up was a trip to the 'Gorms and finding something to climb.  We got onto Original Summer Route on Alladin's Buttress and found soft unhelpful snow but we had fun and it actually felt like winter climbing for the first time this season. 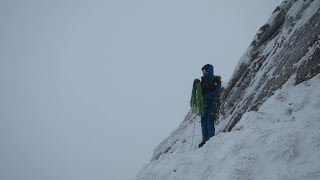 On 30 December, Craig and Mark headed for a very wintery Cobbler and found lots of snow (comparatively) and some wld winds.  We kept to lower ground on Chockstone Buttress area and climbed something at its far end.  It felt a bit thin in the wrong places with plenty snow on the easier angled slopes.  All in, a great wee climb which we thought went around III (4? maybe) with some interesting moves on steep steps.

Earlier in December, we also got into Stob Corrie nan Lochan and got onto Twisting Gully but conditions were soft and thin and after P1 we dabbed off and went for a walk. 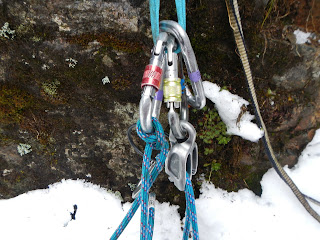 The NY hopefully brings some colder snaps to freeze the pack and get us climbing some new routes.  This weekend is looking cold and should brings us some nice conditions to get swinging those axes in earnest.