Craig and Mark thought winter was over but some recent action suggested otherwise.

Point Five in mind, the boys were up at 330 for an early start and headed for the Ben with some excitement.  Weather gods were good and the rain stayed off and it was 4'C at the top carpark...with things looking white enough. 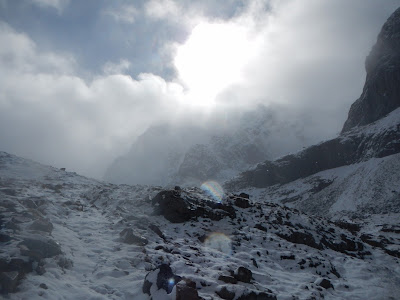 The usual long walk in was dusted and they headed for Observatory Gully, which looked white.  There were flutters of snow and the cloud covered the summit down to around 1000m but occasional glimpse of P5 suggested it looked good.

A pair were ahead starting up the Chimney pitch and as always getting to the base took longer due to the steep approaches.  A single screw belay and Craig was off to run the ropes out.   The placements were pretty good but the ice a bit cruddy in places and out of 5 screws only 1 felt good, the others hitting air in the ice or just being pretty crap, though there is the usual tat in place to clip...with little real confidence.


The route is a bit banked on P1 and we started higher than usual, so Craig ran the Chimney pitch to the top of its first steep section and set up a good nut belay.  The amount of spindrift coming down the route was worrying; initially it seemed it might be the team ahead but the volume was at times heart stopping and increased with progress.

Mark came up and joined Craig on a tight belay and headed off up the final steepening of the Chimney pitch and thence to the Rogue pitch which had nice ice and took a couple of better screws.  The amount of spindrift was now concerning, as if it wasn't before, and after Craig joined Mark, a quick chat and a good decision was made to set up a belay and retreat down the gully; ahead looked grim in the mist and clearly the slopes were getting loaded with little pro on the pitches above.

On an abseil point half way on P2, a massive spindrift 'avalanche' launched down drenching us for a full minute at least...felt longer; we were 2 ft apart and couldn't see each other...that bad!!  Once it abated, we quickly set up and escaped far down our descent to Observatory Gully and the hut.


It's a wonderful climb in good nick just now.  We thought it a bit steeper in the Chimney pitch than previously but it had just enough bridging opportunities to make for comfortable screw placements.

All in a proper belter of a day; steep climbing, challenging conditions and spicy enough to feel tested!

Sadly, that might just be it for us this winter...proper work beckons; after the best day of the season too!
Posted by Craig Coid at 08:01