These Boots Are Made for Walking...

Craig and Mark took the opportunity to visit Ben Nevis for some serious CPD and to check out the Hilux for luxury camping!

Sadly the Hilux is about a foot too short in the 'boot' for comfort but it is acceptable for 5 am starts in the North Face car park.   Saturday saw the wind blowing a traditional Scottish 'Hooly', which made climbing near impossible (beyond justifiable risk for us) and walking a real struggle. 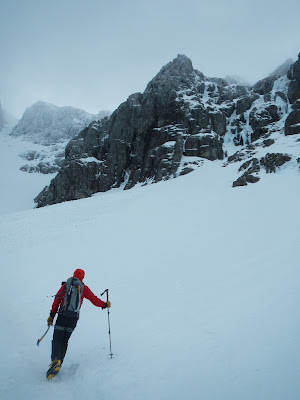 We got into Corrie na Ciste and Mark was blown off his feet, thankfully just as he got his crampons on and was able to recover being lifted about two feet off the ground - the wind was really gusting that bad...with a wind chill factor of about minus lord knows what - there were plenty of doleful looking monkeys about, that's for sure! 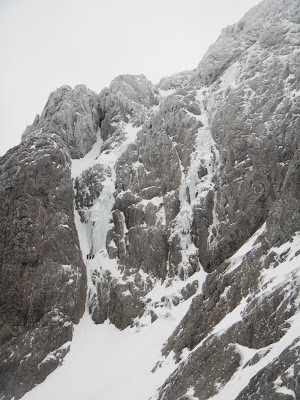 Rather than climb, we went on a long journey around the corrie scoping out future routes and having a good day chilling (literally) in the wind.  It isn't really until you get higher in the corrie that you realise just how massive the Ben is - the scale of the whole place is pretty intimidating and there are 100's of climbs to be had at all grades.   We had a leisurely tramp out and some fiery pasta for dinner to set us up for Sunday... 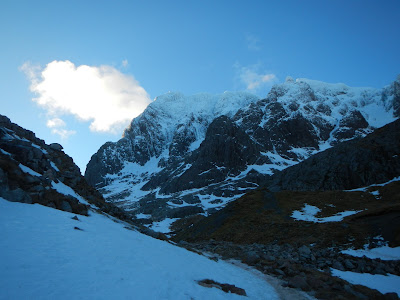 ...which saw us up early and into the corrie around 6am.  We sped past all and sundry on the walk in (the youth of today have no will power!!) and found ourselves first, by the proverbial mile, into Corrie na Ciste and onto Green Gully.   Only a couple of parties from the CIC hut came close to us but we got to the route first and showed them a clean pair of heels.

Mark led the first pitch and we swung it to the top; it is a great climb, meriting its Cold Climb Classic status.  Although stepped out, the pitches are all bomber hard neve and great steep ice pitches on 1, 3 and 4 pitches - well worth its grade.  Protection is pretty scarce on some pitches but manifests itself at just the right times...2 rusty pegs at the top of pitch two came into sight at just the right time, backed up by a couple of bomber ice axes! 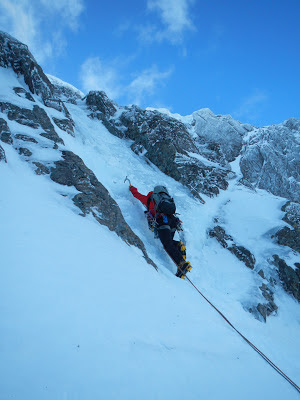 It was staggeringly cold on the climb mind you, with us both shivering uncontrollably on belays, despite wearing every stitch of clothing...that said, it reminds you what a great day you're having :)   We made good, efficient progress to the top, topping out in the start of a passing snow squall.   We descended gingerly via the Red Burn - because of its bomber hard neve, and my 9 month old ankle injury which continues to cause me grief. 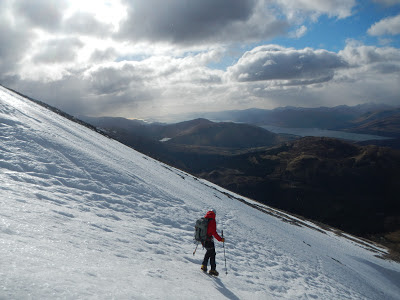 A stop off for the biggest box of chips we've ever had at the chippy in Fort William saw us down the road in time for a celebratory Mother's Day toast and then bed for a well earned snooze! 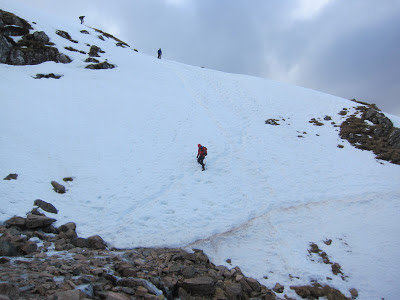 A great weekend, with lots of good learning points and an excellent climb ticked off the list.