Simply Epic out for the first rock of the season, and it was all too early but where's the snow and ice!!

Early start, minimum sleep (clocks forward) and we were on the road at 6am.   Well ahead of the crowds, the sun was out and we sweated up to start of Curved, making our way to the start of the climb. 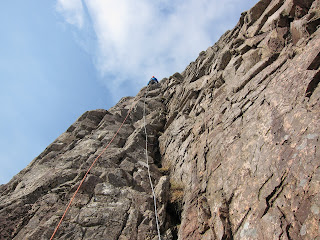 We wasted little time and familiarised ourselves with rock movement, rock shoes and sore feet.   Mark took first pitch, I had two and three and Mark cleared the final.

The third pitch nose was interesting and forces you stop for a 'feel' of the exposure. 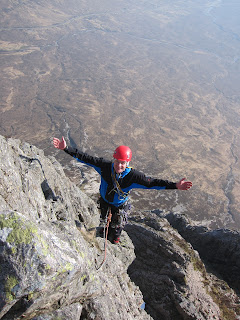 We topped out in glorious sunshine and wandered down to the top of January Jigsaw where we set up the abseil on some tat....always a testing time for the Kahoona challenge.

We got down to the cross over with Agag's and went to pull the rope through but things were solidly stuck...aaargh.   A quick discussion and we tied some loops in the rope and stood on it full force til eventually the rope moved imperceptibly and pulled through...if that had failed, I'd already nominated Mark 'to go get it'!! 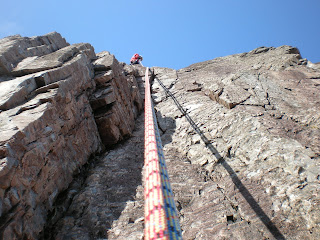 We got down the next ab and Eva was good enough to throw down our sling and krab...climbers are always nice helpful folk in Scotland :)


We had our eyes on January Jigsaw but as we got down, we realised a three man team had popped out Easy Gully and were kitting up.   We sat and had a bite and a chat with some young turks (one from the Ice Factor) and headed home in the sunshine.


What a great day we had...rock climbing isn't winter...but it is still fun :)